For the first time, the U.S. Navy has successfully tracked targets with a multiband radar featuring a common radar suite controller. 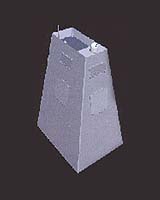 This milestone, which took place at the Navy’s Engineering Test Center, Wallops Island, Va., was accomplished through the use of an engineering development model of the Dual Band Radar (DBR) developed by the Navy’s prime contractor, Raytheon Company, and its subcontractor Lockheed Martin Corporation.

The DBR tracked a target simultaneously at both X- and S-band frequencies. This is the most advanced naval radar in the world and will provide advanced surveillance and ship missile-defense capabilities for the Zumwalt-class destroyer (DDG 1000) and Ford-class aircraft carrier (CVN 78) in both deep water and littoral environments.

This 21st century system combines the benefits of the X-band AN/SPY-3 Multi-Function Radar and the S-band Volume Search Radar (VSR), providing superior performance in a broad range of environments against a variety of threats. It is the first naval radar system in the world capable of simultaneous, coordinated operation across two frequency ranges. 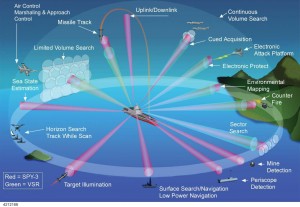 It will provide surveillance and ship missile defense capabilities for the Zumwalt-class destroyer (DDG-1000) and the Ford-class aircraft carrier (CVN-78) in both littoral and deep water environments. Some Navy officials had also wanted to equip the future-build Arleigh Burke class (DDG-51) with the DBR. The leaders believed that adding a new radar to an older platform would increase the platform’s capabilities while reducing costs compared to the DDG-1000. The question of which radar will sail on the new DDG-51 vessels appears to have been resolved. The Navy awarded Raytheon a contract in September 2009 for advance procurement of SPY-1D long-lead-time materials for the first of the new DDG-51 destroyers to be built under the revamped program.

This milestone event simultaneously used AN/SPY-3’s and VSR’s search capabilities to acquire and track the target. Additionally, the test demonstrated the system’s ability to perform automatic handover from S-band to X-band in precision tracking mode, a key feature of the radar and its single track manager.

The DBR is the result of more than a decade of collaboration between Raytheon, Lockheed Martin and the Navy. The radar is now in production for both the Zumwalt and Ford class, where it will replace six legacy radar systems.