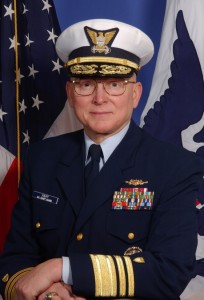 The Coast Guard has been going through a transformational period, under the header of “modernization.” Everything from how the leadership is organized to how the missions are supported will be different.
It’s an effort to prepare for future challenges, including growth in commercial shipping, coastal development, new energy exploration and activity in the Arctic, as well as unexpected events like the oil spill in the Gulf of Mexico.
But as Papp has traveled and interacted with thousands of Coast Guardsmen, he has found that some are not always clear on where the service is headed.
“What they’re looking for from the next commandant is stability and predictability, in terms of the organizational construct and what they can expect in terms of policy,” said Papp, who grew up in Norwich, in a recent interview about his plans as commandant. “They are not looking for another commandant to put significant change on top of all the other change that has occurred over the last eight years.”
Papp relieved Adm. Thad W. Allen in a change-of-command ceremony at Fort Lesley J. McNair in Washington, D.C. Department of Homeland Security Secretary Janet Napolitano presided over the event.
Allen, who directed the recovery operations during Hurricanes Katrina and Rita, is overseeing the response to the Deepwater Horizon oil spill in the Gulf.
He said he has tried to make the transition to Papp and his team “the smoothest and most proactive” in the history of the service, by bringing them into Coast Guard Headquarters weeks ahead of the ceremony to get set up.
“The service expects there will be continuity, and that’s what military leadership changes are about,” Allen said. “But at the same time, Admiral Papp is going to be charting his course as commandant of the Coast Guard and he’ll have some ideas, and the service should be ready to embrace what he wants to do.”
Papp and Allen have known each other since they played football together at the Coast Guard Academy, and Papp served as the Coast Guard’s chief of staff while Allen was commandant.
“He’s going to be approaching the finish line with the baton held out in front of him, and I’ll be up to speed and running to take the hand-off from him,” Papp said.  He jokingly added, “I just hope there’s not Gulf oil on the baton.”
Papp previously served as commander of the Coast Guard’s Atlantic Area, making him responsible for all of the Coast Guard’s missions from the Rocky Mountains to the Arabian Gulf.
At sea, he has commanded the cutters Red Beech, Papaw and Forward and the Coast Guard’s training barque Eagle. He is the 13th Gold Ancient Mariner of the Coast Guard, an honorary position held by an officer with more than a decade of sea duty, who is charged with making sure the service’s traditions continue.
He will draw on his years of experience at the helm as the 24th commandant of the Coast Guard.
“We’re a maritime profession,” Papp said. “I cannot conceive how a person in the Coast Guard can perform their duties and serve the country well if they haven’t had the experience of going out on the ocean or on the Great Lakes and being cold, wet and tired, or hot and sweaty, and dealing with the challenges that being at sea provides.”
Papp wants to complete many of the initiatives started in recent years. Congress is close to passing the necessary legislation to reorganize the service’s structure, and then it will be a matter of implementing the changes. The Coast Guard is continuing to revamp the way it supports its missions, from logistics to maintenance and the financial management system.
“The Coast Guard has always been an adaptable service because of the many missions we perform,” Papp said. “I don’t see new missions coming up. We need to concentrate on the missions we have and give people the right tools and training to allow them to perform.”
Papp plans to thank Allen for his service to the country and wish him well during the change-of-command ceremony today.
“This is Admiral Allen’s day,” he said. “I’ll have four years to talk about my ideas on where the Coast Guard is going, so I’ll thank Admiral Allen and accept responsibility from him.”
Allen is retiring after four decades of service in the Coast Guard. He will stay on as the national incident commander in the Gulf even after he steps down as commandant.
“It has been a great opportunity for me to serve the country. I’ve been doing it a long time,” Allen said. “But I’ve always prided myself on being able to make transitions and move on to the next stage of my life. I’m ready to do that, and I’m confident that the service is in good hands.”