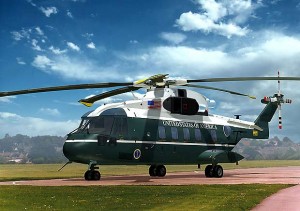 the US 101 is no more a foreign aircraft

Presidential helicopters stand as a talisman, embodying the nuclear mission of the armed forces, America’s technological prowess and our government’s nearly religious concern for presidential safety.

Buying a foreign helicopter would seem downright unpatriotic to many Americans. But the government decided to buy just such a helicopter last time, the ill-fated VH-71. True, Lockheed Martin was the prime contractor and thus it is legally an American aircraft, but the first batch of helicopters was built in Europe by AgustaWestland, a Finmeccanica company. Now Boeing has announced that it is buying the intellectual property rights to the AW101, built by Agusta.
The Agusta bird is “a three-engine, medium-lift helicopter with combat-proven performance, serving with distinction in Bosnia, Iraq and Afghanistan. More than 150 aircraft are in service with five NATO militaries and Japan, and the aircraft was selected for the previous presidential helicopter program…” Boeing notes.
The Chicago company is clearly positioning itself to avoid charges that it is buying a foreign product that has received government subsidies after years of lambasting Northrop and EADS for doing just that. “This license will give Boeing full intellectual property, data and production rights for the aircraft in support of the VXX program.

Because of this arrangement, the aircraft will be a Boeing aircraft, built by Boeing personnel at one of its U.S. facilities,” Boeing said in its statement today announcing the deal. During a call with reporters today Boeing’s VP for rotorcraft, Phil Dunford, said “this is not a partnership… This will be a Boeing built airplane. We don’t know where it will be built.…” He did make clear the aircraft would be built in the U.S.
Asked about whether hefty British subsidies provided for the launch of the helicopter should affect perceptions of the program, Dunford said “we are not aware of any outstanding loans or grants at this time.” He added that he believed the payments have been paid back.
But all this lends credence to defense consultant Loren Thompson’s point in his blog today that: “Boeing’s bid could create some embarrassing moments for both itself and Lockheed Martin. Lockheed Martin spent years arguing that the AgustaWestland airframe was superior to the Sikorsky product it now supports, and a 2008 review by Pentagon policymakers came to the same conclusion. So Lockheed is likely to see its own words used against it in the upcoming competition.”
And EADS North America certainly did not wait long to fire away. In one of the craftier moves we’ve seen this year, they took the occasion of Boeing’s announcement to call on the company to cease its “shrill rhetoric” about international competition and to praise their tanker competitor for having, “openly acknowledged the contribution that international teams, products and platforms make to U.S. national security. For several years, Boeing and its allies have been harshly critical of the participation of EADS North America in the KC-X tanker competition. With this announcement, we now expect Boeing to cease its shrill rhetoric and finally allow the KC-X competition to focus on the merits of the tanker offerings.”
An industry source noted on background that AgustaWestland’s parent company, Finmeccanica, is majority owned by the Italian government. And this source voiced deep skepticism that Boeing would pay Agusta upfront for all intellectual property when the U.S. government has not yet decided exactly what the requirements will be for the presidential helo. The Analysis of Alternatives being done by the Navy may be done by the end of summer, but that leaves considerable room for doubt about just what platforms should be offered. Boeing is keenly aware of this, having already offered the V-22 and the Chinook for the program, on top of which it is offering the AW101.
And the industry source hoisted Boeing on its own petard claiming that only 35 percent of the subsidies have been repaid and noting Boeing hypocrisy on the question of international partners and subsidies: “They don’t seem to have an issue with it when it comes to their own bottom line.”