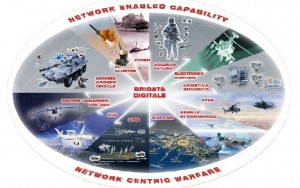 Funding for Forza NEC (Network Enabled Capability), the Italian Army’s digitization programme, has recently been confirmed by Undersecretary for Defence, Guido Crosetto: Forza NEC is a spiral project, envisaging the realisation of three digitalised medium-sized brigades by 2015, which will be consistent with the plan to deliver and integrate Land Forces by 2025.

The aim of the Forza NEC programme is to modernise the armed forces using technology that will make it possible to exchange the maximum amount of operational, tactical and logistical information from each vehicle or individual deployed in the field.

SELEX Sistemi Integrati, a Finmeccanica company, signed the five-year EUR 238 million contract with the Land Armaments General Directorate – Italian Ministry of Defence in its role as main supplier, system integrator and lead company in the definition of the overall system architecture.

The contract covers the manufacture and integration of command posts in shelters and vehicles, communication, command and control devices for soldiers (under the Soldato Futuro programme), unmanned vehicles equipped with sensors, and systems offering full interoperability between the Italian armed forces and the forces of other countries. A test laboratory consisting of numerous military centres connected in a network will also be constructed and delivered.

The Forza NEC project responds to the demand for a flexible military tool where each component is harmonised and which allows integration with allied forces across the full range of national, multinational, NATO and EU operations. Forza NEC enables the creation of network-centric armed forces capable of exchanging information, knowing the exact position of allied forces and identifying potential threats as they arise.

The adoption of Forza NEC will allow the Italian armed forces to increase their operational capacity by using cutting-edge technology that offers particular advantages for operations abroad.