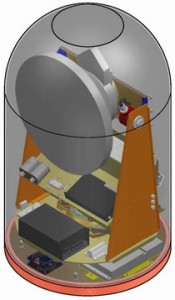 The new radar is based on proven Terma technology and can be used in both fixed and semi-permanent installations, and can be transported for mobile deployment. Deployment, mounting, and setting up are easy. The unit can be carried and deployed by two persons, and it takes less than 10 minutes to deploy it from packed transportation mode to fully operational use. The radar automatically generates a clutter map and optimizes the target-to-noise levels without any required user adjustment.

The SCANTER GSR provides complete 360o coverage through continuous scanning with an adjustable antenna elevation to accommodate uneven terrain which gives optimal performance in the given environment.

The SCANTER Ground Surveillance Radar is a short-to-medium range surveillance radar. It can be used as an autonomous radar or as part of an integrated network of sensors.

Thanks to high frequency and low power emission, the radar has a low probability of being intercepted. As a Doppler radar, the SCANTER GSR detects movement in the presence of high clutter. The high update rate and low false alarm rate ensure uninterrupted and reliable surveillance.

The radar sensor unit comprises a high-resolution radar sensor, a processing unit and a communications module. It easily interfaces with other sensors, eg. video cameras and infrared sensors.

Set up in a complete system, the SCANTER Ground Surveillance Radar system may be connected with one or more radar sensors connected via LAN. All communication between the units is performed via TCP/IP and UDP.