USS KAUFFMAN’s helicopter prevented a pirate attack on MV ICE EXPLORER transiting the Gulf of Aden in the Internationally Recommended Transit Corridor (IRTC). Kauffman was conducting routine air and surface searches for suspect vessels in the area when the merchant ship Ice Explorer called in a pirate attack.

USS KAUFFMAN immediately redirected their helicopter to the merchant ship whereupon the pirates broke off the attack and surrendered. KAUFFMAN’s helicopter crew observed the pirates dumping weapons and other objects in the water. USS KAUFFMAN approached the pirate skiff and her boarding team confiscated some pirate paraphernalia. Additional support was provided by an EU NAVFOR helicopter operating from the Swedish flagship HSw MS CARLSKRONA. 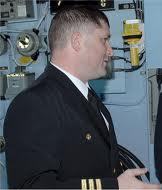 Standing NATO Maritime Group One’s Chief of Staff, Commander Douglas Edson, United States Navy, stated: “The Somali pirates continue to operate in the Gulf of Aden and we will catch them. The combination of determined crews from multiple International Task Forces conducting counter-piracy, coupled with merchant vessels utilizing the Best Management Practices, is the key to minimizing the effectiveness of Somali pirates in these dangerous waters. A sharp lookout on ICE EXPLORER was pivotal to the early detection of this attack which gave us time to direct surface and air assets to disrupt and detain the attacking pirates.”

Pirate attacks have dropped recently because of monsoon weather. At least 17 ships and hundreds of crew members are still being held by pirates.

USS KAUFFMAN is operating as part of NATO’s counter-piracy operation “Ocean Shield” in the Horn of Africa region. Operation Ocean Shield is currently being conducted by Standing NATO Maritime Group 1 under the Command of Commodore Christian Rune, Royal Danish Navy.

NATO Maritime Group 1 (SNMG1) background Information:
NATO has contributed to the international counter piracy effort off the Horn of Africa since December 2008. The mission has expanded from escorting UN and World Food Programme Shipping under Operation Allied Provider and protecting merchant traffic in the Gulf of Aden under Operation Allied Protector. In addition to these activities and as part of the latest mission, Operation Ocean Shield, NATO is working with other international bodies to help develop capacity of countries in the region to tackle piracy on their own.
Standing NATO Maritime Group 1 is permanently assigned to NATO. It is a multi-national Naval Group that provides the NATO Alliance with the ability to quickly respond to crisis situations anywhere in the world. A capable, stand-alone task group and one of four standing maritime elements that form a flexible core around which NATO can build a larger force to meet a wide range of missions that will include non-combatant evacuations, consequence management, counter terrorism, crisis response, embargo operations, etc.
NATO has recently announced its continuing commitment to counter-piracy by extending Operation Ocean Shield to December 2012.