PANAMAX 2010: defense and security of the Panama Canal 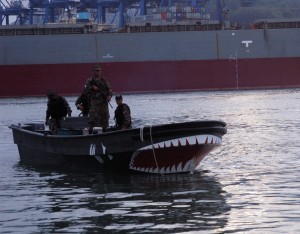 15 PANAMA CITY, Panama - Panamanian Special Forces from the National Aero-Naval Service (SENAN) patrols the harbor in the Panama Canal during PANAMAX 2010 Aug. 19. More than 2,000 civilian and military personnel from 18 countries are participating in the 12-day exercise from Aug. 16-27 to train in a joint, multinational effort to defend the Panama Canal. (Photo by Mass Communication Specialist Second Class (AW/SW) Rafael Martie/RELEASED)

PANAMAX is one of the largest multi-national training exercises in the world. The annual U.S. Southern Command (USSOUTHCOM) sponsored exercise series focuses on ensuring the defense of the Panama Canal, one of the most strategically and economically crucial pieces of infrastructure in the world, crucial to the unrestricted flow of global maritime commerce. The United Nations Security Council in response to a request from Panama instructs the US to lead a multinational force to protect the Canal to ensure shipping traffic and free maritime access.

The purpose of the exercise is to enhance regional cooperation and exercise participating nations’ ground, naval, air and special operators’ ability to respond to threats to the Panama Canal and plan for a major humanitarian assistance and disaster relief event in the region.

During the two-week long exercise, C4F serves as the Combined Force Maritime Component Commander (CFMCC) with the assistance of multi-national forces. PANAMAX prepares the U.S. and participating nations with protecting the passage of traffic through the Panama Canal, ensure its neutrality, and respect national sovereignty. The exercise took place in the waters off Panama and Colombia, and also in Miami and Mayport, Fla., and Norfolk, Va.

More than 2,000 people participanted to the exercise. In addition to the United States, 18 nations are participating in the exercise: Argentina, Belize, Brazil, Canada, Chile, Colombia, Costa Rica, Dominican Republic, Ecuador, El Salvador, Guatemala, Honduras, Mexico, Nicaragua, Panama, Paraguay, Peru and Uruguay. PANAMAX began in 2003 with the participation of three countries: Panama, Chile and the United States. Since then, exercise participation has grown significantly, peaking during PANAMAX 2009 with 20 nations.

Rear Adm. Vic Guillory addressed the attendees and expressed the importance of partnerships as well as the role of the global maritime forces as it relates to the defense of the Panama Canal Zone. “We will exercise command and control form our Maritime Operations Center,” said Guillory. “As our partners, your participation here in Mayport is invaluable, and offers a tremendous opportunity to share and exchange information and learn from one another in a coalition and joint exercise environment.” 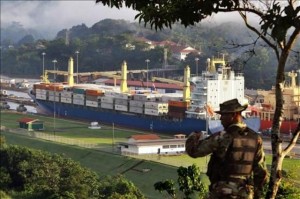 The Panama Canal provides an estimated 800 million US dollars in annual revenue for the Panamanian Treasury. It is estimated that 5% of world trade makes use of the waterway. Since its inauguration in 1914, almost a million vessels have used the canal.

This year’s exercise simulated a “terrorist organization” attack against the Panama Canal plus the control of several countries of the area with the purpose of destabilizing the global economy, according to Jesus Rodriguez Panamanian coordinator of the PANAMAX 2010. In addition participants tested their ability to plan for a major humanitarian assistance and disaster relief mission in the region.

U.S. 4th Fleet, exercised command and control from its maritime operations center in Mayport, Fla.; and U.S. 2nd Fleet, which will serve as a joint task force leading a multinational force operating under a United Nations resolution. USNS Grasp and U.S. Coast Guard Cutter Forward are among 24 vessels taking part in the exercise, as well as units from 12th Air Force in Tucson, Ariz., and U.S. Army South from Fort Sam Houston, Texas.