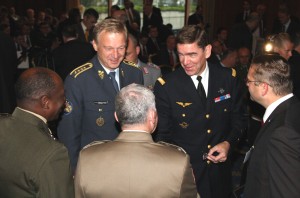 From 5 to 7 October, Allied Command Transformation (ACT) and the NATO Consultation, Command and Control Agency (NC3A) are holding their annual “Industry Days” in Prague, the Czech Republic. The aim is to inform industry representatives about NATO’s capability development processes as well as upcoming business opportunities and major procurements.
Some sessions are focusing on practical information, such as NC3A’s future online tool that will help industry do business with NATO. Other sessions are highlighting opportunities in new and developing areas such as cyber defence, missile defence and countering improvised explosive devices. In his keynote speech, Supreme Allied Commander Transformation (SACT), General Stéphane Abrial, explained that it was more important than ever to spend wisely in today’s tough financial times, when defence spending is threatened by budget cuts

Hard choices, evolving opponents
The complexity of developing and maintaining defence capabilities is also “a result of the accelerating speed of technological change”, General Abrial said. He mentioned robotics and nanotechnology as “potential game-changers”, but current defence budgets limited their exploitation. Hard choices need to be made – by the military as well as industry – and “errors in judgement could be costlier than ever.”
“The paradigm we face in our globalized, interconnected world is that of a hybrid adversary, which can at will use the power of a state or the nimbleness and irresponsibility of a non-state actor; combine low-tech and state-of-the-art capabilities; and strike wherever it finds convenient”.

Interoperability from the beginning
This year is the first time that ACT is holding its Industry Days jointly with NC3A. “Traditionally, we worked on developing capabilities nationally and then worked – and paid – again at the Alliance level to make them interoperable,” said NC3A General Manager Georges D’hollander in his address.
“Now we are seeking, with ACT and industry, capabilities that are ‘born interoperable’ in support of operations and new challenges. As national budgets come under pressure – nations only want to pay once: for capabilities that will work with their NATO partners and protect the safety of their troops,” he said.

Boosting NATO-EU cooperation
Now in its seventh year, one of the key aims of Industry Days 2010 is to improve cooperation between NATO and the EU. It is vital, for example, that the 25 EU countries taking part in the NATO-led mission in Afghanistan have capabilities that are interoperable with those of the Alliance, said General Abrial.

This year’s Industry Days are timely as NATO is set to adopt a new Strategic Concept at the Lisbon Summit in November, which will guide its activities in the years to come. It is also undergoing a process of reform that will affect NATO’s military command structure, agencies and Headquarters.