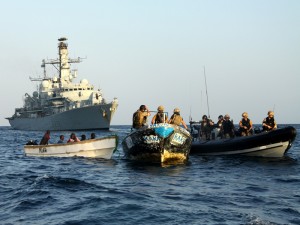 This is the ship’s second counter-piracy success in two weeks. She is currently deployed as part of NATO’s counter-piracy mission off the Horn of Africa.

The ship was alerted yesterday to a gang of ten men acting suspiciously in a small boat off the coast of Somalia near to a known pirate camp. Their boat, loaded with ladders and fuel drums, was towing two other smaller vessels that have been traditionally used for pirate attacks against ships.

HMS Montrose, which left HM Naval Base Devonport this summer, launched her Lynx helicopter and a boat of Royal Marines and sailors to investigate.

After the Royal Navy boarding team confiscated all the pirate gear, thus ensuring that the gang could no longer pose a threat to merchantmen, they were transferred to the remaining skiff.

“Today’s disruption of a pirate gang in the Somali Basin by a NATO warship was very rewarding. Our actions prevented suspected pirates from heading out to sea to prey on innocent merchantmen. HMS Montrose continues to help keep the seas safe.”

The ship’s earlier action against pirates happened in the first week of the ship taking up station in theatre and succeeded in disrupting a suspected piracy attack against a cargo vessel on 1 October 2010, forcing the pirates to abandon their equipment.

The NATO task force is part of Operation OCEAN SHIELD and patrols the Gulf of Aden and Somali Basin as part of the international effort to counter the scourge of piracy.

Despite the vastness of the ocean, counter-piracy forces, such as NATO, the Combined Maritime Forces, the EU Naval Force and other independent maritime forces, continue to successfully disrupt pirate activity and help safeguard merchant traffic.

In addition to these activities and as part of the latest mission, Operation OCEAN SHIELD, NATO is working with other international bodies to help develop the capacity of countries in the region to tackle piracy on their own.

NATO has recently announced its continuing commitment to counter-piracy by extending Operation OCEAN SHIELD to December 2012.