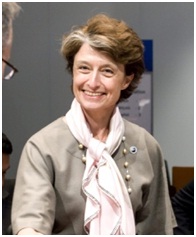 French diplomat Claude-France Arnould will be the new EDA Chief Executive. The « silent procedure » ended 14th days after the 21st of December.

EDA’s previous Chief Executive, Alexander Weis, left the Agency end of September. At that time three candidates has been proposed: Gen Carlo Magrassi, General Manager delegate of the EDA strategy,  Mr Arto Koski, Deputy Director-General in the Finnish Ministry of Defence and Gen Patrick de Rousiers, the head of French military representation to the EU military Committee and the military Committee of the North Atlantic Council till last summer. But since October, France had more than a candidate: Paris ended the curious situation to present three officials for the same position: besides Rousiers Defence candidate, defence Staff proposed the candidacy of General Bruno Berthet and the Ministry of Foreign Affair pushed Claude-France Arnould, Director of Civil-Military planning secretariat of the European Council.

Eventually, Baroness Catherine Ashton, the High Representative of the Union for Foreign Affairs and Security Policy, accepted the candidature from the Quai d’Orsay, but she did not achieved the approval of the EU Countries Defence Ministers because she received the “veto” at least from one delegation. Among others Germany and Italy had strong reservations about the method of appointment used by the High Representative: the situalion was “on hold” auntil they agreed a “way-ahead” for the future nominations principles and accepted to bring the final decision at the 17th Dec Council.

The formal decision was made in the margins of the European Council on 17 December. It has been permitted by the renunciation of the Italians. On their side, the Germans felt that the position previously occupied by one of their nationals was to them, but eventually abandoned.

The official announcement of his appointment expects only the signing of Baroness Catherine Ashton.

Claude-France Arnould is career diplomat and Minister Plenipotentiary, with strong strategic “approach”. She has been Director for defence matters to the General Secretariat of the Council of the European Union in 2001, after having been the Director of policy and international affairs at the General Secretariat of national defense (1998-2001) and First Counsellor at the Embassy of France in Germany (1994 to 1998). Secretary General of the École nationale d’administration (ENA) from 1987 to 1989, Claude – Arnould France also served as technical advisor to Bernard Bosson, Minister delegate in charge of European Affairs during the Chirac presidency (1986-1988).