In Feb. 2011, two 20-month contracts for the initial technology development phase of the 3DELRR, which were awarded to Lockheed Martin Corp. and Sensis Corp., will conclude. 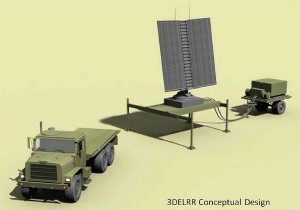 Shown here is a conceptual design of the Three-Dimensional Expeditionary Long-Range Radar. An initial technology development phase is concluding and ESC is working on the next step, a request for proposal, anticipated to be released in March. (Courtesy graphic)

The Electronic Systems Center’s Three-Dimensional Expeditionary Long-Range Radar program is finalizing one step and heading for the next in its development.

Because the TPS-75 was built more than 20 years ago, challenges are occurring with performance and sustainment. In addition, the command and control community has an ever-evolving need to accurately see small targets in stressing environmental conditions, such as weather, terrain and bird flocks, and to see theater ballistic missiles.

3DELRR will capture the best industry has to offer in Advanced Electronically Scanned Array radar technology, as well as leverage more commercial-off-the-shelf components and an open architecture to eliminate the current challenges and posture the radar to handle future challenges. The new technologies will improve the capability to detect and identify enemy and friendly targets. As an expeditionary system, the radar must also be very transportable — easily placed in theater — and very mobile — easily moved around theater.

The Air Force plans to buy 35 new radars to replace the existing TPS-75s. As the 3DELRR is intended to be a joint materiel solution, the Marine Corps is also contributing to its development and looking at the system for future production buys. In fact, the earliest origins of the 3DELRR program can be traced back to the Marine Corps-led Highly Expeditionary Long Range Air Surveillance Radar that was discontinued in the fiscal 2008 budget cycle.

“From my perspective, the initial technology development effort, or what could also be considered the ‘competitive prototyping period,’ has been very successful,” said Major McDonald. “I think both contractors have put a terrific effort into maturing the critical technologies and reducing risk for the program.”

A model was set up with processes in place that allowed the government to work simultaneously with two traditional industry competitors in a collaborative, yet still competitive, way, he said.

Regarding the nearly complete contracts, Major McDonald said, “The whole of the technology development effort was greater than the sum of its parts.”

The next step will be a request for proposal that will include the remainder of the technology development phase and options for Engineering and Manufacturing Development and Low Rate Initial Production.

The 3DELRR program office has conducted several industry days to familiarize interested companies with the program and has also solicited industry comments in many forums.

“We anticipate release of the RFP to occur at or near the end of Mar. 2011,” said Major McDonald. “It will be a full and open competition with a single contract award.”

The contract award is anticipated to occur in the Jan. 2012 timeframe and, if the government elects to exercise all options, the value could approach $740 million.

“You don’t often hear about companies working productively with and against one another at the same time,” said Major McDonald. “In this instance, the seeming dichotomy between collaboration and competition was overcome and has put the 3DELRR program in a great position, understanding our critical technologies and maturing them ahead of schedule, to set us up well for the next portion of the program.”