The Army’s research and development command is evaluating commercial hand-held solutions such as iPad, iPhone, iPod, iMac, and MacBook platforms. 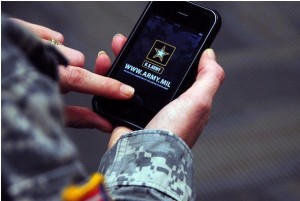 Maj. Gen. Nick Justice, Research, Development and Engineering Command commanding general and key members of his staff met Apple, Inc. to discuss the use of Apple products in Army business and battlefield operations.

Apple officials talked about some examples of where the military is already using Apple technology.

“The Army is moving away from big-green-box solutions and toward those that will adapt along with our warfighters on the battlefield,” Justice said. Justice said the Army recognized the billions of dollars invested by industry to develop its devices.

The meeting was part of the Army’s efforts to support “Connecting Soldiers to Digital Applications,” an initiative to demonstrate the technical capabilities of hand-held devices and applications to the Army and gathering warfighter. The working group is tasked with looking at how commercial cellular technology – including devices, applications and networks – could be utilized in a tactical environment.

The RDECOM communication and electronics center advises on applications and new equipment training and support application delivery to pilot programs in its role as the lead for CSDA applications development.

Within RDECOM, the Communications-Electronics Research and Development Center has developed numerous handheld command and control solutions and is supporting the development and transition of two iPhone applications: COIN Collector, a counter-insurgency information collection tool, and MilSpace, a combined planning and social networking environment.

The app puts Army technology news, updates and media, such as images and video, in one location. The Army Technology Live iPhone application is available as a free download from the Apple iTunes Store.

“Apple technologies offer unique and proven solutions with intuitive designs that allow users to learn quickly without a training manual,” said Ron Szymanski, CERDEC’s lead computer scientist on the project. “The Army would like to leverage Apple’s experience when designing military applications.”

“As we push to develop more commercial capabilities to meet Army information and knowledge management needs, it’s important that we engage companies such as Apple because we stand to benefit just as much from their lessons learned and best practices,” Melendez said. “Eliminating unnecessary processes or degrees of trial and error can only help us as we transition applications that can be deployed to numerous tactical levels throughout the Army.”