US missile interceptors would be deployed in southern Romania, a key link in Europe for a defence shield, prompting Moscow to ask for “safeguards” from Washington. (more on Missile Defence here)

Romania and the United States have been negotiating for more than a year about the deployment of ballistic missile interceptors, which should be operational by 2015.

“We have decided that the anti-missile shield will be deployed at the former airbase at Deveselu,” Romanian President Traian Basescu said.

Moscow, which fears the shield could be turned against Russia, swiftly demanded assurances from Washington. “In this situation, US legal guarantees on their intention not to deploy a missile defence system aimed at the strategic nuclear forces of Russia is becoming even more relevant,” Russian Foreign ministry said quoted by news agencies.

The Romanian airbase located in an agricultural region 100 kilometres (62 miles) north of the Bulgarian border was built nearly 60 years ago with assistance from the Soviet Union (more on Deveselu air base position here). In 1952, the first Soviet-made MiG-15 aircraft landed on the 700-hectare (1,700-acres) base. Nearly a third of it will be used by American troops, whose number could go from 200 to a maximum of 500.

Closed down in 2002, the airbase will need investment worth 400 million dollars to become operational again, officials said. An ‘American district’ will be built in the 3,300-inhabitant village, the mayor Gheorghe Bece told Mediafax news agency. “We are confident that Deveselu will be an excellent site and will prove to be the optimal location” for the interceptors, Lieutenant General John Gardner, deputy commander of the US Europe Command, said.

The choice was made after a detailed analysis of security requirements, Basescu stressed.

Washington originally planned to install its anti-missile shield in Poland and the neighbouring Czech Republic, aimed at countering feared attacks from Iran. But that plan, which angered Russia after it saw itself as the target for the shield system, was scrapped by US President Barack Obama in September 2009.

Washington has since reworked the scheme and signed a new treaty with Moscow on reducing strategic nuclear weapons.

Russia has said it reserves the right to withdraw from the treaty if Washington presses ahead with missile defence systems in eastern Europe in a way that Moscow opposes.

But Basescu stressed that the shield was “purely defensive and not directed against Russia.” “The US missile shield has been discussed for a long time at both a political and a military level. So I don’t think Russia still has doubts about its defensive nature,” former foreign minister Cristian Diaconescu told AFP.

The deployment of the US European-based Phased, Adaptive Approach for Missile Defense (EPAA) system started with the presence since March in the Mediterranean of a guided missile cruiser equipped with Aegis radar, the USS Monterey.

The second phase is to include the deployment of 24 SM3-type interceptors in Romania, followed in 2018 by a similar deployment in Poland. “This is the highest level of security Romania can attain,” Basescu said.

Analysts said the agreement marked a step further in the strategic partnership between the US and Romania, a former communist country seen today as one of Washington’s closest European allies. 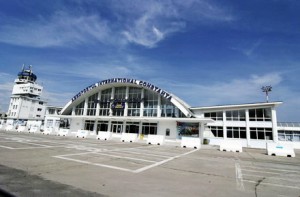 Basescu’s announcement coincided with the start of a visit to Develescu by Ellen
Tauscher, US Undersecretary of State for arms control and international security affairs. Basescu also said US troops and military equipment bound for Iraq and Afghanistan would be allowed to transit through its main port of Constanta on the Black Sea as well as the local airport.

“We have approved the use of the Mihail Kogalniceanu airport and of the harbour of Constanta for the transit of US troops and equipment going to Iraq and Afghanistan and back to Europe,” Basescu said.

“Kogalniceanu and Constanta will thus become two strategic sites for the US as well as for Romania.”