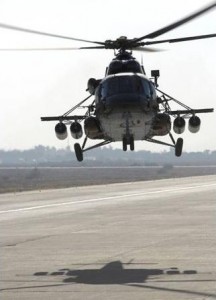 The U.S. Army is acquiring and sustaining Russian-built Mi-17 helicopters for Iraqi and Afghan forces so they can further stand up their respective militaries and enable more U.S. forces to return home, service officials said.

“We’re buying those systems because our (servicemembers) don’t get to come home until (Iraqi and Afghan militaries) take over the mission and are trained to do it,” said Maj. Gen. Tim Crosby, who serves as program executive officer for aviation. “There’s incentive
for us right now.”

The U.S. Army’s Non-Standard Rotary Wing program office plans to acquire 21 new Mi-17s for Afghanistan. The office has already bought 22 of the aircraft for Iraq, of which 14 have been delivered, said Col. Norbert Vergez, who heads up the project.

“The primary consideration was based on a desire by the customer, in the case of Afghanistan, to have a platform that they were familiar with and that was simple and easy to operate,” Vergez said. “They wanted something that was immediately available for them to assimilate into their armed forces.”

The Mi-17 was originally designed by the Russians in the 1970s. The helicopter was used by the then Soviet Army in the war between the Soviet Union and Afghanistan. It is well suited for operating in that environment. Since that time, the Afghan military has used the Mi-17 and become familiar with the aircraft’s operation.

Vergez said the high-altitude-capable, troop and supply-carrying Mi-17 is considered a national asset by the Afghans.

“It is an extension of the sovereign Afghan government beyond Kabul,” Vergez noted. “For example, during a series of recent floods in the mountains, the Afghan government launched two of its recently acquired Mi-17’s to help the people.”

Vergez said that over a five day period, using the Mi-17, the Afghans were able to rescue over 1,000 people from the floods.

“That builds good will,” he said. “Afghanistan is tribal, so when the central government comes in with that kind of power, it really goes a long way.”

Vergez said delivery of the Mi-17s, which fly at altitude up to 19,860 feet, mean the Afghan military will gain further independence and that means fewer U.S. military will need to be in Afghanistan.

“There is no air support for Afghanistan other than the Americans as we establish this capability for Afghanistan,” Vergez said. “With every one of these deliveries we are able to bring Americans home.”