Defense Secretary Robert Gates, in an interview at the CNN’s “State of the Union” discussed triumphs and trials in Iraq Sunday on CNN’s “State of the Union.” “I am worried about Iranian influence (in Iraq),” he revealed. But, “We have taken a real toll on (al Qaeda) over the last two years.” Gates described a commitment to Iraq in the form of a “residual American presence” beyond December 2011 to “train” and “participate in counterterrorism.”
What is clear for Gates is the importance and the impact that possible budget cuts will have on that force. “We need to be honest with the president, with the Congress, with the American people…about what those consequences are,” he said. “A smaller military, no matter how superb, we’ll be able to go fewer places and be able to do fewer things.” 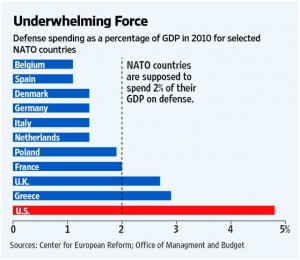 Gates also made reference to the recent SDA Conference in Brussels where he stressed once again the need of better support NATO, arguing the Libya operations demonstrated America’s allies suffered from serious gaps in military capabilities because of their failure to spend enough on their own defense. “America’s European allies”, Mr. Gates said in Brussels, are “apparently willing and eager for American taxpayers to assume the growing security burden left by reductions in European defense budgets.”  ( Full Text of Gates’s speech on NATO here).

Mr. Gates blasted the alliance for failing to develop intelligence and reconnaissance assets, forcing NATO to rely on American capabilities to develop targeting lists. “The most advanced fighter aircraft are little use if allies do not have the means to identify, process and strike targets as part of an integrated campaign,” Mr. Gates said.
Mr. Gates said the alliance had outperformed his expectations in Afghanistan. But even in the face of increased operations there, NATO defense budgets have fallen, forcing allies to put off critical modernization programs.
In the 10 years since the Sept. 11, 2001, terrorist attacks, U.S. defense spending doubled. European defense spending, Mr. Gates said, fell by 15%. NATO members are supposed to spend 2% of their GDP on defense, but only five of the 28 allies meet that target.