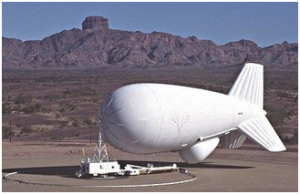 In addition to providing capability benefits, the Seaspray 7500E radar is perfectly suited to aerostat operations due to its solid state AESA technology which makes it highly reliable. This allows the radar to remain deployed on aerostat balloons for many weeks at a time.

“We are thrilled that our proven AESA technology is leading the Company into this exciting market” said Alastair Morrison, SVP for radar and advanced targeting at SELEX Galileo, adding “Seaspray has already been sold to a number of customers including the US Coastguard and US Customs and Border Protection. This contract demonstrates the versatility of the technology and the Company‘s agility in adapting quickly to new market demands”.

Seaspray 7500E radars have been selected by the US Department of Homeland Security (DHS) and US Customs and Border Protection (US CBP) for installation in the organisation‘s King Air 350ER Multi-role Enforcement Aircraft (MEA). The US Coast Guard also selected the Seaspray 7500E for its HC-130H maritime patrol aircraft, which is now in operational service.