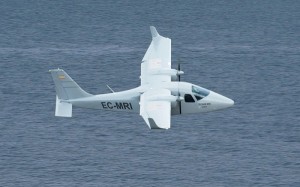 Indra, the premier IT company in Spain and a leading IT multinational in Europe, is working on the development of a new maritime surveillance light aircraft in collaboration with Italian aircraft manufacturer Tecnam, firms SELEX Galileo, FLIR Systems and Remote Sensing and Sensor Integration company Airborne Technologies.
The five partners seek to develop an aircraft equipped to provide state-of-the-art surveillance at a more competitive cost in terms of acquisition and operation. The aircraft will be ready to engage in rescue missions, protection of fishing fleets and environment; and surveillance of illegal trafficking of either people or drugs, among others. The aircraft will be ready to enter service by the end of 2012.
This aircraft will patrol those maritime zones usually kept under surveillance by coastguards with medium-size helicopters for a considerably reduced cost and highly more efficient as it will be equipped with a thorough maritime surveillance system (radar, AIS vesseld ID system and a cutting-edge electroptical device).
To develop a solution of this type tecnam’s P2006T platform was selected. This light, twin-engine aircraft is easy to pilot and uses traditional fuel which dramatically reduces costs in operation. It also requires minimal maintenace and can takeoff and land in makeshift runways.
The aircraft will be able to patrol an area from 50 to 200 nautical miles offshore. This zone is out of the range of coastal surveillance systems and medium-size helicopters which can make it up to 100 miles. In order to cover this zone effectively the required maritime patrol aircrafts can be acquired and operated at a much higher cost.
The competitive cost of this new platform will permit the forces in charge of coast surveillance and protection of the exclusive economic zone to afford the necessary units to undertake their duties in these waters. At the same time, by reducing operation costs, the aircraft can patrol as many times as necessary.
In-depth knowledge of maritime surveillance
The participation of Indra, SELEX Galileo, FLIR Systems and Airborne Technologies contributes knowledge and experience to this project to equip the aircraft with the necessary intelligence to engage in maritime surveillance missions. The systems to be implemented will allow the platform to explore areas of up to 40,000 nautical square miles each time.
Indra will undertake the implementation of the mission system, the key element to control embarked sensors, integrate collected data and present them to the operator. The mission system also allows control of broad band bidirectional communications with the ground station which receives and submits information in real time as the information generated can be integrated and processed in any existing coastal surveillance or maritime traffic control systems.
Regarding the sensors, the aircraft will be equipped with SELEX Galileo’s Seaspray 5000E radar whose detail degree allows distinction of the shapes and sizes of objects and is capable of detecting vessels or small objects in the sea. It will also carry a state-of-the-art electroptical camera of large format and high definition of FLIR Systems. We should also add a vessel id system which captures the automatic signals of ships. This identification signal emitted by ships is compared with that supplied by the aircraft sensors, thus facilitating surveillance and detection of suspicious actions.
Leadership in maritime security in Europe
Indra’s technology currently controls over 3,500 km of borders world wide. It is a leading company in the development and start-up of coastal surveillance systems in Europe and its systems cover almost all the territorial waters of the Iberian Peninsula, the coast of Latvia and the coasts of the Black Sea in Rumania. The company also leads the Perseus project, an ambitious initiative boosted by the European Union to develop and test a maritime surveillance system by means of the integration of existing national systems of the continent. Outside Europe, Indra has developed a surveillance system to control Hong Kong’s coasts and its more than 200 isles.
In the area of Unmanned Aircrafts (UAVs), the company is awaiting the time the law permits their use in the civil air space.
Source : Indra