Europe Needs To Invest In Defense 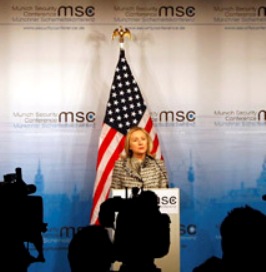 The United States said at the Munich Security Conference 2012 that Europe remains Washington‟s “partner of first resort” despite a U.S. strategic pivot to Asia, but it urged Europe to pull its weight.
In a twin effort to reassure Europe about the historic U.S. commitment to the continent, U.S. Secretary of State Hillary Clinton and Defense Secretary Leon Panetta delivered carefully calibrated messages of support.
Hot foreign policy issues such as Iran, Afghanistan and Syria also loomed large over the 48th annual Munich Security Conference, a gathering of world leaders, ministers and top brass.
In a speech at a roundtable talk with Panetta, Clinton pledged cooperative efforts for a united and secure Europe, mutual economic recovery, an “agile” security alliance, and a democratic Middle East along the Mediterranean.
Clinton also urged her European partners to work together in meeting “the opportunities that lie ahead” in the Asia-Pacific region.
“I‟ve heard all the talk about where Europe fits into America‟s global outlook. I‟ve heard some of the doubts expressed. But the reality couldn‟t be clearer: Europe is America‟s partner of first resort,” she stressed.
Forced to make tough choices in tight budgetary times, the United States is shifting its military priorities to Asia and the Middle East — even if it has pulled its troops out of Iraq and begins a drawdown in Afghanistan.
Reducing its military presence in Europe while tailoring it to future threats, Washington sees the looming strategic challenge in the Asia-Pacific as a newly powerful and assertive China rattles U.S. allies in the region.
In opening the conference on Feb. 3, German Defense Minister Thomas de Maiziere said Europe should not fear a renewed U.S. focus on Asia and must increasingly look after its own backyard militarily without its historically.
In his Feb. 4 speech, Panetta said: “Europe remains our security partner of choice for military operations and diplomacy around the world — as we saw in Libya last year, and as we see in Afghanistan every day.
“We are therefore deeply committed to strengthening transatlantic security partnerships and institutions, including NATO,” he said.
While the U.S. military plans to withdraw two of its four Army brigades stationed in Europe by 2014, Panetta announced that a U.S.-based brigade will contribute to the NATO Response Force, a 13,000-strong unit created in 2002.
The U.S. military will also rotate a battalion-sized task force to Germany to take part in exercises and training.
But Panetta also renewed pressure on European allies to keep investing in defense and to pool resources as part of the “Smart Defense” initiative aimed at maintaining military capabilities.
Polish President Bronislaw Komorowski said: “I am convinced the time is ripe for the EU to seriously take its responsibilities for the security in Europe and its neighborhood.”
Clinton meanwhile voiced confidence that Europe has “the will and the means” to cut runaway debt, build “the necessary firewalls” to protect the euro and take steps to spur growth.
“As Europe emerges from economic crisis, we have to work harder to reinforce each other‟s recoveries. As deep as our economic relationship is, it has not yet lived up to its potential,” Clinton said.
But Australia‟s foreign minister Kevin Rudd launched a fierce broadside at Europe, saying the financial crisis has caused it to turn in on itself and warning it risked an “early grave” amid Asia‟s economic and political rise.
Clinton and Germany‟s foreign minister Guido Westerwelle also appealed for U.N. Security Council action to stop the bloodshed in Syria where an estimated 6,000 people have died in a 11-month crackdown on pro-democracy protests.
Clinton later met Russian Foreign Minister Sergei Lavrov on the sidelines of the conference in a bid to clinch Russian support for the tough U.N. resolution which also supports a transition to democracy in Syria.
A senior U.S. official said Washington still had hopes that Russia would sign onto the resolution but did not say how much progress, if any, Clinton and Lavrov had made in bridging differences over the draft resolution.
The pair had a “very vigorous discussion,” the official said on condition of anonymity.
By LACHLAN CARMICHAEL, AGENCE FRANCE-PRESSE