“Arms Control in the Information Age” 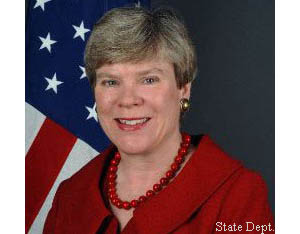 Acting Under Secretary for Arms Control and International Security Rose Gottemoeller visited Estonia on April 1-2, 2012 to discuss issues of mutual interest, including the future of conventional arms control in Europe, with her counterparts.
During her visit, Acting Under Secretary Gottemoeller met with Under Secretary for Political Affairs Sulev Kannike from the Foreign Affairs Ministry and Under Secretary for Defense Policy Jonatan Vseviov from the Ministry of Defense; she also visited the NATO Cooperative Cyber Defence Center of Excellence and the Estonia’s e-governance system and x-road at the ICT Demo Center in Ülemiste City Tech Park.
At the Estonian IT College she provided a lecture, titled “Arms Control in the Information Age”.
“Sluggish moves to counter the rising threat of cyber-attacks can be blamed on a generation of policymakers out of touch with rapid technological change”, she said, “The truth is there are a lot of senior officials in many countries who barely even know how to use an email,” “The change will come with the new generation”.

Gottemoeller also said governments should consider incorporating open-source IT and social networking into arms control verification and monitoring. “In order to pursue the goal of a world free from nuclear weapons, we are going to have to think bigger and bolder,” she explained.

“New concepts are not invented overnight, and we don’t understand the full range of possibilities inherent in the information age, but we would be remiss if we did not start thinking about whether new technologies can augment over half a century of arms control negotiating expertise,” she added.