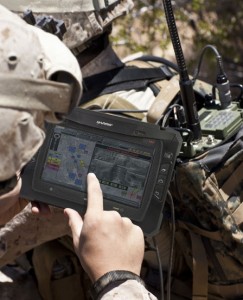 Harris Corporation, an international communications/IT company catering specifically to government and commercial markets, officially unveiled their own 7″ Android-powered tablet today, meant to provide a rugged tool for the transmission of “mission-critical” communication for defense and public safety. The tablet is specifically aimed at military personnel and first responders, who “require secure real-time information at their fingertips to execute their missions.”

The tablet has been graded as a ruggedized device, meaning it can stand up to extreme heat, cold, or other rough environments and still provide critical functionality to its users. Dana Mehnert, group president of Harris RF Communications further explained the benefits of Harris’ new tablet: “The new Harris tablet builds on our leadership in mission-critical communications to provide a powerful device for processing mission-critical information. This tablet was fully designed for the tactical and public safety environment with optimized features for reading in sunlight and size, weight and power. As an Android device, the tablet also is fully upgradeable for emerging applications.
The tablet, lovingly named the “RF-3590,” packs Harris’ own Falcon III wideband tactical radio, also supporting 3G and 4G LTE connectivity. Besides that, the tablet boasts a dual-core 1.5GHz processor, 128GB of “non-volatile” memory, and all the bells and whistles a first responder may need, from an accelerometer, to gyroscope, to standard USB and Ethernet ports. According to the release, Harris has already received initial orders for the tablet, and “is optimistic the product will be well received.”
Harris’ ruggedized tablet is no doubt a great example of the versatility afforded by a platform like Android, and will certainly make a great addition to the tool kits of defenders and first responders everywhere. For more info, check out the full press release below.
Source: Harris Press Release Posted by Liam Spradlin in Android OS, News