We report here after recent achievements in the electrical energy production based on “light-trapping” technologies, use of “Exotic form of Silicon” and “high-efficiency multi-junction” techniques.

Recent advances in nanophotonic light trapping open up the new gateway to enhance the absorption of solar energy beyond the so called Yablonovitch Limit. It addresses the urgent needs in developing low cost thin-film solar photovoltaic technologies. However, current design strategy mainly relies on the parametric approach that is subject to the predefined topological design concepts based on physical intuition. Incapable of dealing with the topological variation severely constrains the design of optimal light trapping structure. Inspired by natural evolution process, here we report a design framework driven by topology optimization based on genetic algorithms to achieve a highly efficient light trapping structure. It has been demonstrated that the optimal light trapping structures obtained in this study exhibit more than 3-fold increase over the Yablonovitch Limit with the broadband absorption efficiency of 48.1%, beyond the reach of intuitive designs. (http://www.nature.com/srep/2013/130103/srep01025/full/srep01025.html#affil-auth) 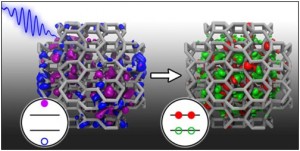 But now, researchers at the University of California, Davis, and in Hungary have taken this idea a step further to generate more than one electron-hole pair per photon. To achieve an improved efficiency, the team simulated the behavior of a structure of silicon called silicon BC8, which is formed under high pressure but is stable at normal pressures. “This approach is capable of increasing the maximum efficiency to 42 percent, beyond any solar cell available today, which would be a pretty big deal,” said Stefan Wippermann, a postdoctoral researcher at UC Davis. “In fact, there is reason to believe that if parabolic mirrors are used to focus the sunlight on such a new-paradigm solar cell, its efficiency could reach as high as 70 percent.”
Because of their small size, nanoparticles have different properties than bulk materials. In particular, their probability of generating more than one electron-hole pair is significantly enhanced because of an effect called quantum confinement.
“But with nanoparticles of conventional silicon, the paradigm works only in ultraviolet light,” Wippermann said. “This new approach will become useful only when it is demonstrated to work in visible sunlight.”
Computer simulations run through the National Energy Research Scientific Supercomputing Center at the Lawrence Berkeley Laboratory demonstrated that nanoparticles of silicon BC8 indeed generate multiple electron-hole pairs per photon even when exposed to visible light.
“This is more than an academic exercise,” said UC Davis professor of physics Gergely Zimanyi. “A Harvard-MIT paper showed that when normal silicon solar cells are irradiated with laser light, the energy the laser emits may create a local pressure high enough to form BC8 nanocrystals. Thus, laser or chemical pressure treatment of existing solar cells may turn them into these higher-efficiency cells.”
The work, funded by a National Science Foundation Solar Collaborative grant, appears in Physical Review Letters (doi: 10.1103/PhysRevLett.110.046804). 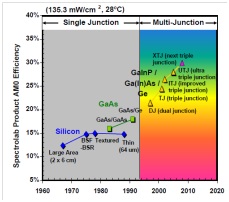 The U.S. Department of Energy’s National Renewable Energy Laboratory in Golden, Colo. verified the record performance of 37.8 percent cell efficiency using a new class of high-efficiency multi-junction solar cell, created from two or more materials. The record was set without concentration, the common practice of having lenses or mirrors focus solar rays on the cells.

The record was achieved by Spectrolab, which is part of the Boeing Defense, Space & Security unit. “We expect this solar cell technology will have significant benefits for space, ground-based, and sensor applications,” said Troy Dawson, president of Spectrolab, a Boeing subsidiary. Spectrolab believes this solar cell technology can attain higher levels of efficiency, “possibly more than 45 percent even under low concentrations,” according to Nasser Karam, the company’s vice president for advanced technology
.
Source : www.nature.com, www.ucdavis.edu, Boeing