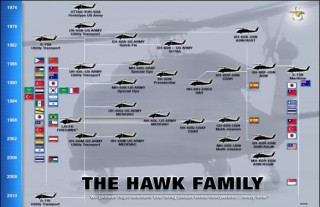 NH90 had been excluded from the bidding process because of its commercial links with Italian defence conglomerate Finmeccanica, which the MoD ‘partially banned’ from new tenders in July.

This limited proscription followed the 1 January termination of the EUR750 million (USD764 million) contract for 12 AgustaWestland AW101 helicopters for the Indian Air Force (IAF) on alleged corruption charges that remain under investigation in India. Finmeccanica has denied any wrongdoing in the case.

Under this partial ban Finmeccanica and its subsidiaries or joint ventures are permitted to participate in ongoing defence contracts that were at an advanced stage of negotiation, but are prohibited from joining new tenders. NHI is 32% owned by AgustaWestland.

Only Sikorsky’s MRH commercial bid, submitted in 2009-10 along with NHI’s, will now be opened by the MoD later this month for a requirement pending since 2007-08. Thereafter, price negotiations for 16 platforms will be opened.

The S-70B aircraft will also enhance the Indian Navy’s capabilities to perform non-combat maritime roles, including search and rescue, utility and external cargo lift, surveillance and casualty evacuation.
Sikorsky has fielded increasingly more capable variants of the S-70B helicopter since 1984 for navies that prefer to acquire a modern, fully integrated ASW/ASuW platform direct from the manufacturer.

Now operational in six countries (in Europe, Middle East, Asia and Latin America), the S-70B platform has a solid reputation for highly reliable shipboard operations and maintenance while operating aboard frigates and larger naval vessels.

The S-70B aircraft is part of Sikorsky’s SEAHAWK helicopter family (including the SH-60 and MH-60 models) that has accumulated almost four million flight hours from more than 800 operational aircraft, and is considered one of the safest platforms available.