Security need for two folds cooperation and synergies both between countries and among the different stakeholders (Defence, Research, Industry, Associations) 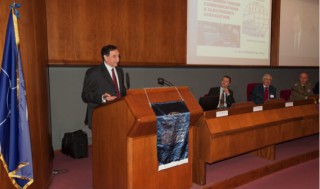 Rome, 14/1 – The Honourable Domenico Rossi, Italian Under-Secretary of State for Defence, attended, as Guest Speaker, at the “Global solutions for Defense, Intelligence and Security” conference, organized by the Rome Chapter of AFCEA.

The Hon Rossi focused his speech on the issues of security both in the field of defence & security and in analogous issues, on technological advances, and finally on the need for two folds cooperation and synergies both between countries – especially in Europe – and among the different stakeholders (Defence, Research, Industry, Associations).

“We live in a world characterized by increasing geopolitical instability, which raise sensitive issues of defence and security, domestic and international.” “Italy,” said the Hon Rossi mentioning efforts to improve the “culture” of security “is about to give birth to the Defence White Paper”, which, however and contrary to the past, “should be continually updated in function of the evolution of the scenarios “; and a greater dialogue between all participants in the sector is needed so that the message can be translated into a language simple and understandable at all levels.

The theme of the Defence and Security was also one of the “points of the agenda of the European Semester Italian Presidency”. The theme has been expanded to include the protection of critical infrastructure, border control, maritime domain, disaster resilience, cyber security, urban security “that is, everything that has been the subject of today’s conference,” because “these are interconnected issues” in a double dimension: multinational and multidisciplinary.

“Security can be improved” if it makes good use “of the impressive escalation of technologies”. This especially applies to activities related to defence and security, and activities that can provide updated data with characteristics of interoperability, security and distribution on-the-fly, assume a very high strategic value, both to counter the threats, and to reduce the risks. “

“No one can solve alone security problems”, and in the current economic situation, it is absolutely necessary to wider cooperation, and not only among National Governments Organizations, but also involving Industry, Universities, Study Centres and Research.

The Hon Rossi concluded with a political message: “If we want to reach a higher level in the prevention of the threat” it is necessary that every country make a “step back” in the concept of national sovereignty, and accept to agree and share common goals. “A great Europe should be the final term of reference.”