Dassault, DCNS and MBDA signed contracts in Cairo respectively for 24 Rafales, a multimission frigate and missiles for Egypt, in a deal worth €5.2 billion (US $5.9 billion). The sale to Egypt is the first export contract for the Rafale and the frigate.
(here-below the status of the FREMM programme and of the RAFALE Export) 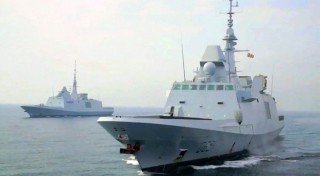 Thales is one of the major supplier of the Rafale omnirole combat aircraft and the FREMM multi-mission frigate, which will both equip the Egyptian forces. Twenty-four Rafale aircraft and one FREMM frigate have been ordered by the Egyptian authorities.

Thales provides numerous pieces of state-of-the-art equipment and systems for the Rafale, the FREMM and their respective armaments. They represent around 25% of the total value of the Rafale and 20% of the FREMM.

Thales, a member of the Rafale team with both Dassault Aviation and SNECMA (Safran), equips this combat aircraft with systems providing it with a multi-sensor capability such as the RBE2 AESA, the first European combat radar with active electronic scanning antenna, the SPECTRA electronic warfare system, optronics, the communication, navigation, identification suite, avionics, and the power generation systems. 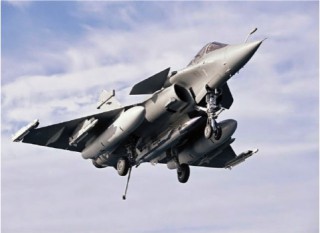 The Thales systems developed in collaboration with DCNS on board the FREMM derive from the latest state-of-the-art technology. For this multi-mission frigate, Thales provides the Herakles multi-function radar, the communication suite, the anti-submarine sonar suite (ASM), the Artemis infrared search & track system (IRST) and the electronic warfare system (RESM/CESM). This equipment reinforces the anti-air, anti-naval and anti-submarine combat capabilities of the FREMM.

For this contract Thales will also provide missile electronics and inertial systems. “Thales thanks the Egyptian authorities for the trust that they have shown in Thales and in its partners by choosing their naval and aeronautical systems. We also wish to highlight the strong support of the French authorities in the conclusion of this contract. We are proud to contribute to Egyptian defence with our technological equipment.” Patrice Caine, Chairman & Chief Executive Officer, Thales Group

Status of the FREMM Programme

(from Wiki and other sources)

The FREMM (European multipurpose frigate) (French Frégate européenne multi-mission or Italian Fregataeuropea multi-missione) is a class of frigate designed by DCNS/Armaris and Fincantieri for the navies of France and Italy.
Three original variants of the FREMM were proposed to replace the existing classes of frigates within the French and Italian navies;

A total of 27 FREMM were to be constructed – 17 for France and 10 for Italy – with additional aims to seek exports, however budget cuts and changing requirements has seen this number drop significantly. The land-attack variant (AVT) was subsequently cancelled.

A third anti-air warfare variant of FREMM was proposed by DCNS in repose to French requirements for a new air-defence frigate, the new variant became known as FREDA (“FREgates de Défense Aériennes”, “Air defence frigate”). This new French requirement was due to the third and fourth Horizon-class frigates being cancelled after the first two cost €1,350m each, but this decision left French Navy still in-need of replacements for its ageing Cassard-class air-defence frigates.

As of 2009, the FREDA design features a more powerful version of the Thales Herakles passive electronically scanned array radar and 32 cells of SYLVER A50 in place of the 16 cells of A43 and 16 cells of A70. The SYLVER A50 would allow it to fire the 120 Km (75 mi)-range Aster 30 missile; the towed array sonar would not be fitted.

At Euronaval 2012 DCNS showed a new concept called FREMM-ER for the FREDA requirement, again based on the FREMM, but specifically mentioning the ballistic missile defence mission as well as anti-air. FREMM-ER has a modified superstructure replacing Héraklès with the new Thales Sea Fire 500 radar, whose four fixed plates resemble those of the US Navy’s AN/SPY-1. However unlike the Héraklès and the SPY-1 (both using passive electronically scanned array technology), the Sea Fire 500 has active electronically scanned array antennas.

On 24 October 2007 it was announced that the Royal Moroccan Navy had ordered one FREMM to replace its Descubierta-class corvette. The contract was signed on 18 April 2008 and construction of the Moroccan FREMM began in the summer 2008 with delivery expected in 2012 or 2013 Mohammed VI was launched in September 2011 and handed over on 30 January 2014. The Moroccan ship is similar to the French anti-submarine version, without SYLVER A70 tubes for SCALP Naval, and cost €470m.

On 22 January 2009 the Hellenic Navy announced an order for six FREMM to replace an equal number of Elli-class frigates. After the Greek government-debt crisis this was cut down to between two and four ships equipped with SCALP Naval, with France alleged to have offered them to Greece at no cost for the first five years. Germany called foul on this deal in October 2011 and no deal has been signed. In February 2013 though and during the formal visit of the President of France, François Hollande, in Athens, according to press reports an agreement which includes the long-term leasing of two FREMM frigates (Normandie and Provence according to initial reports) to the Hellenic Navy has been reached.

The Egyptian Navy will purchase 2 FREMM vessels to enter service before the opening of the expanded Suez canal. In order to keep to Egypt’s deadlines, France has offered to send Normandie as the first vessel and build a second, or send another of the existing ships already in production.

Planning assumptions for the Italian Navy are 10 FREMM-IT (4 ASW variants and 6 GP variants) at a cost of€5.8 billion.
FREMM-IT will replace the Maestrale and Lupo-class frigates in service with the Italian Navy.

As of 2014, the Italian government has approved funding for the first eight FREMM-IT to be delivered to the Italian Navy (4 ASW variants and 4 GP variants). In the 2013 Italian budget, the Italian government laid-out the necessary financing for two more GP variants (FREMM-IT 7 & 8) and the contract was awarded in September 2013. On 18 June 2014, the Defence Parliamentary Commission authorized units 9 and 10, that have to be funded by 16 April 2015.

FREMM-IT 9 & 10 will have AAW & ATBM capabilities and will have A70 VLS for cruise missiles. All Italian FREMM-ITs have extended AAW capabilities, with SAAM-ESD CMS and Aster 30 (& Aster 15) missiles for extended area defence. SAAM-ESD CMS use Selex ES MFRA, a 3D active radar (AESA), an evolved version of the Selex ES EMPAR PESA radar (previously embarked on Horizon-class destroyers and the aircraft carrier Cavour).

Since the 7th FREMM-IT, there will be updates to other systems, such as:

Original plans were for 17 FREMM to replace the nine D’Estienne d’Orves-class Avisos and nine anti-submarine frigates of the Tourville and Georges Leygues classes . In November 2005 France announced a contract of €3.5bn for development and the first eight hulls, with options for nine more costing €2.95bn split over two tranches (totaling 17).

Following the cancellation of the 3rd and 4th of the Horizon-class frigates in 2005 on budget grounds, requirements for an air-defence derivative of the FREMM called FREDA were placed – with DCNS coming up with several proposals. Expectations were that the last 2 ships of the 17 FREMM planned would built to FREDA specifications, however by 2008 the plan was revised down to just 11 FREMM (9 ASW variants and 2 FREDA variants) at a cost of €8.75bn (FY13, ~US$12bn).[1] The 11 ships would cost €670m (~US$760m) each in FY2014, or €860m (~US$980m) including development costs.

The 2013 White Paper on Defence and National Security committed France to 15 front-line frigates, which was initially wrongly interpreted as 2 Horizons, 5 La Fayettes and a reduction in the FREMM fleet down to 8 ships. The 2014/2019 defence plan restated a target of 11 FREMMs; the current plan is to deliver 6 ASW variants to replace the Georges Leygues-class frigates by 2019, followed by two anti-air variants to replace the ageing Cassard-class frigates and a decision will be taken in 2016 on what version the remaining three will be.

In 2014, the French Navy’s Chief of Staff, Adm. Bernard Rogel, confirmed that 11 FREMM frigates had been ordered. The first La Fayette-class vessel was commissioned in 1996 so will be nearing the end of its life at 25 years old by the time the 9th FREMM is delivered.

In November 2014, it was reported by several sources, including the French newspaper La Tribune that Egypt was in negotiations with France to purchase 24 to 36 Rafales, subject to the financing agreement. As of February 2015, the two countries were negotiating a loan from France’s export credit agency to reach an export agreement for up to 24 Rafale fighters. Egypt was hoping to complete deal quickly to have aircraft on display at the inauguration of the Suez Canal expansion in August 2015. On 16 February 2015, Egypt officially ordered 24 Rafales as part of a larger deal (including a FREMM multipurpose frigate and a supply of missiles) worth US$5.9 billion (€5.2 billion).

The Rafale was one of the six fighter aircraft competing for the Indian MRCA competition for 126 multirole fighters. Originally, the Mirage 2000 had been considered for the competition, but Dassault withdrew the Mirage in favour of the Rafale. In February 2011, French Rafales flew demonstrations in India, including air-to-air combat against Su-30MKIs

In April 2011, the Indian Air Force (IAF) shortlisted the Dassault Rafale and Eurofighter Typhoon for the US$10.4 billion contract. On 31 January 2012, the IAF announced the Rafale as the preferred bidder in the competition. Under the proposed contract, 18 Rafales would be supplied to the IAF by 2015 in fly-away condition, while the remaining 108 would be manufactured by Hindustan Aeronautics Limited (HAL) in India under transfer of technology agreements. The contract for 126 Rafales, services, and parts could be worth as much as US$20 billion.

The deal was stalled from disagreements over the fighter production in India. Dassault refused to take responsibility for the 108 HAL-manufactured Rafales, as it had reservations about the ability of HAL to accommodate the complex manufacturing and technology transfers of the aircraft. Instead, Dassault said it would have to negotiate two separate production contracts by both companies. The Indian Defence Ministry instead wanted Dassault to be solely responsible for the sale and delivery of all 126 aircraft. In May 2013, The Times of India reported that negotiations were “back on track”, with plans for the first 18 Rafales to be delivered in 2017.

As of January 2014, the MMRCA contract was still being negotiated. In addition to the primary aforementioned disagreement, another point of contention is a provision where Dassault will have to reinvest 50 percent of the deal’s earnings into India’s defence sectors, either through purchases or technological expertise. In March 2014, the two sides were reported to have agreed that the first 18 aircraft would be delivered to India in flying condition and that the remaining 108 would be 70 percent built by HAL.

India will decide on the fate of a long-delayed deal for 126 Dassault Rafale fighter jets only after March, the country’s defense minister said on Wednesday.

The contract was initially worth $12 billion and could go up to $20 billion.

The Qatar Emiri Air Force was, as of January 2011, evaluating the Rafale together with the Boeing F/A-18E/F Super Hornet, the Boeing F-15E, the Eurofighter Typhoon, and the Lockheed Martin F-35 Lightning II to replace its then inventory of Dassault Mirage 2000-5s. The decision for an order for 24–36 aircraft was scheduled to take by the end of 2012. By June 2014, Dassault claimed it was close to signing a contract with Qatar for 72 Rafales. Delivery would likely occur in two batches of 36 aircraft.

Qatar is reported to be considering an order for 24 Rafales and options for a further 12.

In September 2014 it was announced that the UAE could acquire 40 Rafales in addition to upgrades to its existing Mirage 2000s.