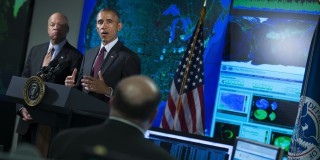 One of the reasons that the US has been slow to respond to attacks is because its security agencies don’t talk to each other. This lack of communication may make the FBI, CIA etc look very butch. The Obama administration is establishing a new agency to combat the deepening threat from cyberattacks, and its mission will be to fuse intelligence from around the government when a crisis occurs.

This is why the White House established a new agency that’s designed to remedy the problem. The agency is modeled after the National Counterterrorism Center, which was launched in the wake of the Sept. 11, 2001, attacks amid criticism that the government failed to share intelligence that could have unraveled the al-Qaeda plot.

The US Cyber Threat Intelligence Integration Center (see below) has been given the official go-ahead, and will sit between the FBI, NSA and CIA, amongst others, collating that data and offering a cohesive policy to fight off digital attacks. Others question why a new agency is needed when the government already has several dedicated to monitoring and analyzing cyberthreat data.

The Department of Homeland Security, the FBI and the National Security Agency all have cyber-operations centers, and the FBI and the NSA are able to integrate information, noted Melissa Hathaway, a former White House cybersecurity coordinator and president of Hathaway Global Strategies. “We should not be creating more organizations and bureaucracy,” she said. “We need to be forcing the existing organizations to become more effective — hold them accountable.”

The CTIIC will be responsible for is informing both lawmakers and US businesses of impending threats and advise upon solutions and will begin with a staff of about 50 and a budget of $35 million.

By the authority vested in me as President by the Constitution and the laws of the United States of America, I hereby direct as follows:

Section 1.  Establishment of the Cyber Threat Intelligence Integration Center.  The Director of National Intelligence (DNI) shall establish a Cyber Threat Intelligence Integration Center (CTIIC).  Executive departments and agencies (agencies) shall support the DNI’s efforts to establish the CTIIC, including by providing, as appropriate, personnel and resources needed for the CTIIC to reach full operating capability by the end of fiscal year 2016.

Section 2.  Responsibilities of the Cyber Threat Intelligence Integration Center.  The CTIIC shall: