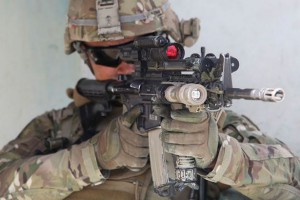 The U.S. military began testing on an electric ray gun defense weapon that may potentially provide a new level of protection for combat troops in overseas war zones deactivating enemy weapons on the battlefield.

The “Burke Pulser”, named after its developer James E. Burke, is an attachment that will snap onto the M4 rifle, and is able to emit a powerful, targeted blast of electricity capable of frying the electric circuits of roadside bombs and IEDs.

This application is of particular interest to the military after years of operating in the Middle East, where booby-traps and homemade roadside bombs have caused the most non-fatal injuries of any conflict that America has been involved in.

While other systems, like the truck-mounted HEL-MD lasers, are being built to fry incoming aerial threats like drones and missiles, the Pulser is meant to instead obliterate the electrical circuitry of roadside bombs and IEDs.
The Pulser has proven very effective against a wide range of electronics devices, such as a timer, a transistor, and a LED light. Burke says, “All these things pretty much generalize all the common electronics you’ll find in a circuit board. What we’re going to do is fire at it. If the LED light stops blinking, it was defeated, and if smoke comes up, it was destroyed.”

Because a weapon’s capabilities are usually classified for strategic and security issues, Burke has declined to offer specifics about the Pulser’s range or go into great detail about how the testing is going, but he did volunteer that the results are “promising”. The driving idea of the Pulser is:” Why not use something that every soldier already carries?” The design strategy of portability differentiates the Burke Pulser from other electric guns that the military has considered in the past. In fact “Most of these (other weapons) are vehicle-towed and require a huge power system and sometimes 7 feet antennas!”

The Burke Pulser attaches to a soldier’s weapon as conveniently as a flash suppressor. Furthermore, compared to other weapons that have been tested in the past, the Pulser is remarkably cost-effective, at a price tag under $1000.

That’s a heck of a lot cheaper (in both money and manpower) than sending in an EOD (bomb disposal) squad.

The Pulser converts the explosive energy of the gun into electrical energy using a piezoelectric generator and two protruding antennas to generate powerful bursts of electrical charge. The entire unit fits onto the end of the Army’s M4 carbine just as a standard-issue flash suppressor does. Because of the vast amounts of electricity that will be generated by the weapon, the Pulser also has a built-in shield to protect the operator.

The directed beam can then be used to deactivate electronics in a range of weapons systems and explosive devices.