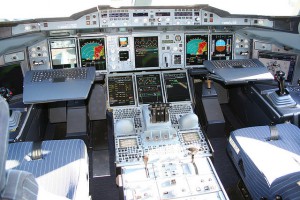 UTC Aerospace Systems’ Actuation & Propeller business unit is supplying the active side-sticks for the cockpit of the new Irkut MC-21 single aisle aircraft. The MC-21 family of aircraft will include two versions ranging from 150 to 212 seats. The MC-21-300 is scheduled to achieve its first flight next year and enter into service in 2018.

Active side-sticks, which are already in use in aviation industry, are a new development for large commercial aircraft. “The development of the active technology for large commercial aircraft constitutes an engineering breakthrough offering new features to pilots and wider opportunities for the aerospace industry,” said Arnaud Delpeuch , program manager for Actuation & Propeller Systems.

The performance of the new active side-sticks was well-received by Irkut test pilots during a series of trial runs in Figeac, France .

A side-stick or sidestick controller is an aircraft control column (or joystick) that is located on the side console of the pilot, usually on the righthand side, or outboard on a two-seat flightdeck. Typically this is found in aircraft that are equipped with fly-by-wire control systems.

The throttle controls are typically located to the left of the pilot (or centrally on a two-seat flightdeck). Only one hand may thus be used for the stick, and both-hands operation is neither possible nor required.

This arrangement contrasts with the more conventional design where the stick is located in the centre of the cockpit between the pilot’s legs, called a “centre stick”.

In the centre stick design, both the pilot’s and co-pilot’s controls are mechanically connected together so that each pilot has a sense of the control inputs of the other. In typical Airbus side-stick implementations, the sticks are independent. The plane’s computer either aggregates multiple inputs or a pilot can press a “priority button” to lock out inputs from the other side-stick