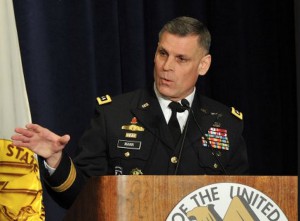 At an age where warfare technologies are being developed everyday, the military must set its eyes on the future constantly. Leaders of the world are trying ot focus on the most recent technologies, which could put them at the head of the race for missile defense.

The American Ministry of Defense is looking for a way to speed up the next generation of these defense systems, and there are some projects that focus on nano-satellites to provide off-the-grid communication, futuristic lasers that can remove approaching threats and more.

Enemy threats in the space and missile fields just keep growing stronger and wider, not only in ballistic and cruise missiles, but also in development of technologies such as a hypersonic weapon systems, anti-satellite technologies, cyber threats and unmanned aerial systems.

According to lieutenant general David Mann, a commander of Army Space and Missile Defense Command, three programms in the nano-satellites are already set for this coming fall. He said that satellites provide beyond-line-of-sight communication, which is crucial since there’s no knowing where the forces will be deployed next and what the infrastructure will look like.

Mann states that nano-satellites are a low-cost solutions for communicational support and are beneficial for units operating in remote locations while on the move. Additionally, they allow tactical leaders to better synchronize actions and seize the initiative while maintaining situational awareness.

He added that the military is entering a cooperative research and development agreement alongside Lockheed Martin, a leading national corporation in the aerospace, security and technology fields, meant to examin next summer a laser weapon to be used against unmanned aerial vehicles and mortar rounds. Mann emphasized that the laser the military is interested in, meant to be used on the ground, is different than the seaborne lasers that the navy wants and the airborne lasers the air force wants, and so on.

It seems that promising, exciting new technologies are in development all the time, some of them naturally classified. The fact that there is a large spectrum of capabilities the military needs to address keeps the technological innovation progressing constantly.