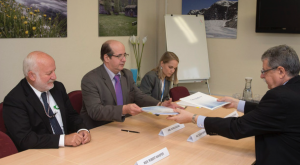 A new Memorandum of Understanding (MOU) on cyber defence cooperation was signed between NATO, represented by Assistant Secretary General Ambassador Sorin Ducaru in his capacity as the Chairman of the Cyber Defence Management Board (CDMB), and the Czech Republic, represented by Engineer Dušan Navrátil, the Director of the Czech National Security Agency. This represents a second generation of the MOU template, which was approved by Allies in line with the 2014 Enhanced NATO Policy on Cyber Defence. The MOU aims to improve and enhance cyber defence cooperation and assistance between NATO and national cyber defence authorities.

Congratulating the Czech Republic for being the first Ally to sign this new MOU, which was endorsed by NATO Defence Ministers in June, the Chairman of the Cyber Defence Management Board, Ambassador Ducaru stated that “we are glad that the Czech Republic was quick to complete their MOU with NATO. Such an MOU represents an important tool for NATO and Allies to ensure better protection of our networks.”

The Czech Republic expressed their content and determination for further cooperation, stressing the “importance of their swift decision making, which is critical when it comes to cyber security crises”. Director Navrátil highlighted the significance of cyber defence cooperation within the Alliance and also offered support to NATO from national specialists and experts on cyber defence. This was welcomed by the Chairman of the Cyber Defence Management Board, stressing that such support “is not only about information exchange but also training and exercises.”