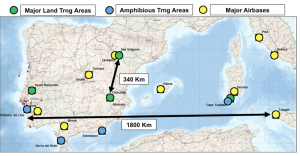 The Air Operations Command (AOC) in Poggio Renatico, Ferrara, is the nodal center of Air Operations of Trident Juncture 2015, the massive NATO military exercise taking place this month of October in the central Mediterranean.

Trident Juncture 2015 (TRJE15) is a high visibility exercise that will showcase NATO on the world stage.  It will take place from 28 September to 06 November in multiple locations across the Alliance including Italy, Portugal and Spain.  Over 25,000 troops are expected to participate.

Military industries of 15 countries also participate to assess what other capability NATO needs.

The purpose of TRJE15 is to train and test the NATO Response Force, a high readiness and technologically advanced force comprising of land, air, maritime and special forces units capable of being deployed quickly on operations wherever needed.  The exercise represents the final step in the certification process for the command and control elements of the NRF for 2016 where JFC Brunssum will be the on-call Standby Command.  The exercise will also allow Allies and partners the occasion to train, deploy and exercise in a complex and distributed environment.

The exercise aims to increase and improve interoperability between the armed forces of member countries and partners of the Alliance, and is the largest NATO exercise to take place in recent years.

In the exercise, more than 30, 000 troops will take part from more than 30 nations. The objective is to train and certify the NATO Response Force (NRF) 2016. This is a readily available and technologically prepared force, capable of deployment to wherever necessary in a short period of time.

“The director of the JFACC (Joint Force Air Component Command) Poggio Renatico is the responsible for the direction and control of air exercises.

He is supported by the three leaders of the so-called Operational Control Rooms or LOPSCON Air cells, operating in the bases of air forces realignment in Beja, Albacete and Trapani for the management of overall exercise, while the LOPSCON Air cells direct and control daily local exercises”.

In Poggio Renatico over 400 Italian Air Force military and 15 countries of the Atlantic Alliance are engaged. The first training phase was used to exercise in a simulated chain of command and control of all NATO forces deployed. This allowed the Italian Joint Force Air Component of Ferrara to gain the necessary certification schemes ally before being made available for the year 2016 of the NATO Response Force (NRF), the rapid reaction force able to intervene in a few hours in any chessboard of international war.

The integrated Command of the Air Force of Poggio Renatico assumed a key strategic role in the management of air operations and radar control of the Atlantic Alliance.

Last June the first ACCS (Air Command and Control System) site was activated in Poggio Renatico: it will provides a system to NATO command and control (C2) for unified planning and execution of all operations of aerial surveillance.

The open ceremony of the TJ15 Exercise is held in Trapani with the participation of high representatives of the IT MoD, the NATO Deputy SecGen, Amb. Alexander Vershbow, the ACT Supreme Commander, Gen Denis Mercier, Gen Claudio Graziano, Chief of Defense and the Commander Allied Joint Force Command Brunssum, Gen. Hans-Lothar Domrose.