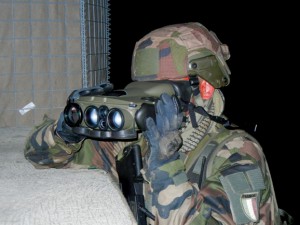 Sagem (Safran) has received a new order for more than 200 JIM-LR long-range multifunction infrared binoculars from the army in a NATO country. The order will also include remote-control terminals, and will be added to the JIM-LR units already deployed by the country.

This latest success follows JIM-LR orders recorded by Sagem at the end of 2015, for both export markets and in France as part of the JIR-TTA-NG program, consolidating Sagem’s leadership in the portable optronics market segment.

An integral part of the digital battlefield, JIM-LR plays a decisive role in military operations as part of the real-time tactical information chain. It has proven to be a crucial soldier protection factor in asymmetrical combat situations.

Sagem has made several innovative improvements to the JIM-LR, enhancing its performance in terms of detection, target designation, system integration and image processing. Because of its open architecture, JIM-LR can be associated with a laser designator or Sterna, a geographic North seeker developed and built by Sagem. It can also be remotely operated via military or civil networks. And as part of a fixed or vehicle-mounted station, it acts as the optronic sensor on Sagem’s MOST optronic land surveillance mast.

JIM-LR has become the operational standard in this sector, being deployed by over 40 countries for intelligence, infantry, artillery, special mission and force, border and coastal protection missions. Over 9,000 JIM-LR binoculars are now in service or under order worldwide, including more than 2,000 for French forces.

The JIM-LR is produced in France by Sagem’s plant in Poitiers.