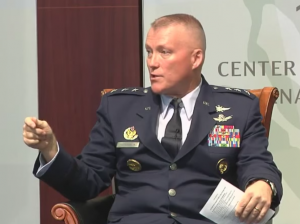 In the event of a catastrophic cyber attack on civilian infrastructure, the US military’s Cyber Command is one of the first and major lines of defence. However, the Pentagon won’t be able to test its ability to respond to such an event at least until 2019.

Mid-June, Cyber Command completed its Cyber Guard exercise. The drill gathered 800 representatives from various US agencies – including FBI, Justice Department, Homeland Security, and more – to practice repelling a major cyber attack on US infrastructure. On the whole, the exercise was a success, except for one minor snag: it didn’t even come close to emulating a full scale attack against the US.

“We don’t have the scale or the complexity to truly represent a realistic and relevant threat, the ones that we’re truly trying to train to,” Brig Gen Charles L. Moore Jr, the Joint Chiefs of Staff’s deputy director for global operations, said in a hearing at the House of Representatives.

At the hearing, Cyber Command’s deputy commander, Lt Gen James K. “Kevin” McLaughlin, was asked if his forces were prepared to respond to the full range of potential attacks.

“I would not be able to say I’m confident we would be able to respond to all of those,” McLaughlin responded. “Control systems are different than platforms like airplanes and tanks, which are different from networks.”

Cyber Command is working to rectify this and is building a Persistent Training Environment – a sort of improved cyber firing range. It will hold a significantly wider selection of systems, networks, devices, and commercials industry participants. There, operators will train against a large range of attacks around the clock. This, Cyber Command chiefs assure, will give them the ability to be prepared for all (or most) possibilities. But the range won’t be ready until 2019, and until then, the US is appreciably vulnerable to cyber attacks.

The Role of the U.S. Military in Cyberspace:Lt Gen James K. “Kevin” McLaughlin keynote speech at the Center for Strategic & International Studies, discussing the military’s role in cybersecurity for the nation, as well as providing an update on USCYBERCOM’s journey to build cyber-ready forces and to employ them when significant cyber attacks against the nation require DOD support. (video from CSIS)