Use NATO to Fight ISIS in Europe 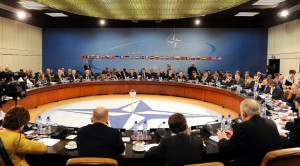 (copy of a Bryen’s article: see below) – Europe is in a war but it does not seem to know it. Neither does NATO which has not been called upon to fight the war. All of this is very strange, because the turmoil being caused by ISIS in Europe poses a considerable threat to peace and security.

President Obama, as is well known, does not think too much of the ISIS threat anywhere, thinking it is not existential. But the truth is otherwise. ISIS was planning an attack on a Belgian nuclear reactor and was collecting data on other nuclear installations.  Extensive ISIS-made surveillance film captured by police shows dramatic evidence that ISIS was well along on organizing such action.

There are different theories about the ISIS objective or objectives. These include: (1) blowing up a nuclear facility; (2) stealing radioactive material for a “dirty” bomb; (3) kidnapping nuclear officials and holding them for ransom; (4) sabotaging power plants and cause them either to go off line or to be made unrepairable; (5) crashing an airplane into one of the power plants in Belgium.

Two of the bombers who attacked Zaventem, the Brussels international airport, apparently were airport employees so they could enter the facility with an employee pass and avoid inspection. Had they chosen to do so, they could have allowed hijackers into the airport. 50 Islamic State supporters are working at Zaventem as baggage handlers, cleaners and catering staff

There isn’t any doubt that ISIS has penetrated critical infrastructure facilities in Belgium including its nuclear power plants. At least two Jihadists employed at the Doel nuclear plant left Belgium for Syria to fight with ISIS. One of the men, Ilyass Boughalab, is believed to have been killed in Syria and another was briefly jailed for terrorism in 2014 before disappearing.

Last November there was an unexplained explosion at the Doel Nuclear Power Station, which caused significant damage.

Overall the security situation at critical infrastructure facilities in Belgium is terrible. Israeli security had warned the country about the airport, but to no effect. Turkish authorities repeatedly warned about the suicide bombers and their colleagues, who they twice deported. Again to no effect. Others are keeping quiet, but it is likely Brussels got many more warnings and just sat on its hands.

The abysmal security situation in Europe is a major threat not only to all the nearby European capitals, but it is a threat to the United States and many others, especially if there was a nuclear incident. When Chernobyl melted down, there were major leaks of radioactive material into Europe. Even as recently as this year, 29 years after the disaster, forest fires in Ukraine have spread radioactive debris into Europe as far north as Scandinavia and Italy. The danger of a local nuclear plant explosion in the heart of Europe could impact millions, because the area is much more densely populated than Chernobyl in the northern Ukraine.

It is fairly clear that police and law enforcement authorities in Belgium and in the rest of Europe too lack any real ability to deal with the local terrorist threat, itself now being reinforced as ISIS and other Jihadists flood into Europe. It is foolish to depend on local law enforcement anywhere in Europe. Either they lack the manpower, know how, training, or political support, or all of the above, to handle the situation. This leaves Europe a ticking time bomb.

What is needed is a military intervention managed by NATO. Isn’t it odd that NATO folks have no lack of enthusiasm to go bomb folks in Libya, Iraq and Syria, but have nothing to say about the threat at their very doorstep. NATO has not held one meeting about confronting the ISIS threat in Europe or even declaring war on this terrorist organization.

How could NATO help?

There are five major steps a NATO intervention can achieve:

These steps are how to fight ISIS in Europe. This should be the first priority of any self-respecting European government, and it should be the first duty of NATO to go after ISIS on its own territory. This is the only practical way to get rid of this threat.

Dr. Stephen Bryen is the author of the new book, “Technology Security and National Power: Winners and Losers” (Transaction Publishers). Dr. Stephen Bryen has 40 years of leadership in government and industry. He has served as a senior staff director of the U.S. Senate Foreign Relations Committee, as the Deputy Under Secretary of Defense for Trade Security Policy, as the founder and first director of the Defense Technology Security Administration, as the President of Delta Tech Inc., as the President of Finmeccanica North America, and as a Commissioner of the U.S. China Security Review Commission. Dr. Bryen’s expertise and high effectiveness has earned him the highest civilian awards of the U.S. Defense Department on two occasions and established him as a proven government, civic and business leader in Washington D.C. and internationally. Dr. Bryen is regarded as a thought leader on technology security policy.