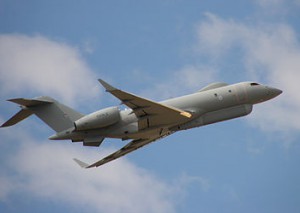 The deal with Raytheon UK will provide the Sentinel aircraft with in-service support and maintenance, meaning it can continue to meet the RAF’s operational requirements. With the ability to gather intelligence on enemy movements and track specific targets, the Sentinel remains a key element in the UK’s operations against Daesh in Syria and Iraq.
Minister for Defence Procurement, Harriett Baldwin said: ”Sentinel aircraft provide vital intelligence to our Armed Forces, giving them the ability to make decisions that helps keep Britain safe, including on current operations against Daesh.” ”As part of our pound 178 billion equipment plan, this contract is supported by a Defence budget that will rise every year until the end of the decade, meeting the NATO commitment to spend 2% of GDP on Defence. This new support contract will sustain 160 jobs across the UK and demonstrates the very tangible benefits which Defence is bringing to the nation’s economy.”
The new contract to provide support for the aircraft for the next 5 years is expected to sustain around 120 jobs at RAF Waddington in Lincolnshire and 40 roles at Hawarden Airfield near Broughton, North Wales.

Chief Executive Officer of the MOD’s Defence Equipment and Support organisation, Tony Douglas, said: ”This support contract demonstrates how we are working collaboratively with industry to sustain UK jobs and to ensure our equipment remains fit for purpose and continues to meet the needs of our military customers.” ”This contract was required to deliver on the decision in the 2015 SDSR to extend this key airborne surveillance platform, and I am delighted with the speed that the DE&S delivery team have worked with industry to negotiate this new contract, which is a testament to their drive, professionalism and delivery focus.”
The Sentinel fleet provides an ‘eye in the sky’ airborne mission management system that gives troops persistent, wide-area, all-weather surveillance. The aircraft uses air to ground search capabilities, by scanning areas from a safe distance to protect the Armed Forces in delivering actionable, accurate information. The aircraft have served on numerous operations, including Afghanistan and as part NATO operations in Libya in 2011.

The Minister also visited Kent Periscopes in St Asath to view their new innovative periscope assembly facility, before hosting the small and medium sized enterprise (SME) Forum which included a showcase of SME products and services for defence and a more formal meeting to discuss issues such as market access for SMEs and intellectual property.
Based in St Asath, Kent Periscopes designs and manufactures optical systems for some of the MOD’s key armoured fighting vehicle programmes through companies such as Lockheed Martin, General Dynamics and Babcock. The Ajax programme alone has helped sustain 20 jobs at the company. After securing major long term business on MOD programmes, Kent Periscopes has invested around pound 250,000 to further expand their business and increase their workforce by a third by 2018.
Minister Baldwin continued: ”The investment that Kent Periscopes have made in their new facilities is testament to the highly skilled work force and the economic benefits Defence delivers in Wales and across the UK.”

The Raytheon Sentinel is an airborne battlefield and ground surveillance aircraft operated by the Royal Air Force. Based on the Bombardier Global Express ultra long range business jet, it was adapted by Raytheon to meet the RAF’s requirements. Originally known as the ASTOR (Airborne STand-Off Radar) programme the aircraft is operated by a RAF squadron manned by both air force and army personnel. The Sentinel is interoperable with other allied systems such as JSTARS and the NATO Alliance Ground Surveillance (AGS) system. (en.wikipedia.org)