Czech Companies Start Getting to Grips with Industry 4.0 Revolution

Revolutions promise change, the only problem being that the promised changes don’t always go to plan and rapid transformation often throws up its own batch of winners and losers. It’s not surprising then that the so-called fourth industrial revolution – which basically amounts to the introduction of more automation and digital technology to the manufacturing process has sown its own batch of fears and concerns. 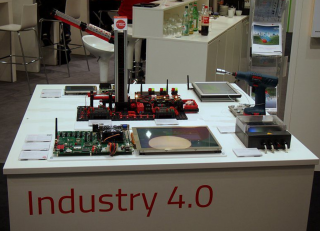 The Czech Ministry of Labour and Social Affairs has warned in its study of the possible effects that around 140,000 jobs could disappear within the eight years to 2025. And the government initiative passed last year dealing with the so-called Industry 4.0 scenario goes even further by warning that 54 percent of all Czech jobs could be at risk from the process.

Clearly most of the jobs at risk are those which are repetitive, such as cashiers in shops and supermarkets. But even jobs which might now be regarded as semi-skilled, such as long distance truck drivers, could be at risk as well with the possibility of automatically driven cars, trucks, buses, and other forms of transport.

The Czech Republic has so far not been in the forefront of preparations for the new industrial revolution – a conference in 2015 year highlighting the issue was masterminded by the Czech-German Chamber of Commerce and Industry. Part of the reasons were clearly somewhat selfish, German companies have re-sited a lot of their manufacturing and sub-contracting in the Czech Republic and are keen that the local companies are able to keep up with their demands and needs.

According to the Czech business daily, Hospodářské Noviny, a trio of German companies in the Czech Republic are leading the way with the 4.0 revolution. They are Volkswagen-owned Škoda Auto, Continental, and Siemens.

Siemens last year launched an investment program which aims to introduce the new technology in all its seven Czech factories. Bosses say the investment should improve quality and production by cutting current manufacturing times by around a tenth. But Siemens says that while some Czech positions will be lost in the short term at the moment the trend is still towards recruitment.

Czech unions’ fears about mass lay-offs have also been assuaged for the moment, according to the paper. The head of the biggest grouping of Czech unions, the Czech and Moravian Confederation of Trades Unions (ČMKOS) Josef Středula says that automatization can get rid of repetitive jobs. But he argues as well for broader preparations for the new industrial revolution which look at the wider implications. “That’s why we are saying that together with Industry 4.0 we should also have a Work 4.0 and Society 4.0,” Středula told the paper.