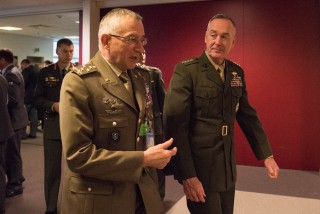 Dunford told reporters traveling with him that Russia has built up its capabilities in the nuclear and cyber arenas and in space assets. The nation, which faces tough economic and political problems, is still spending vast sums to modernize its military capabilities.

He spoke to reporters following the meeting of the NATO Military Committee.

“We reassure members of the alliance that we will meet our commitments, we deter potential adversaries and we posture ourselves to respond in the event deterrence fails,” Dunford said.

There are actually two different deployments to Europe right now. One — the deployment of the 3rd Brigade of the 4th Infantry Division in Poland — is part of Operation Atlantic Resolve and is a U.S-Poland bilateral agreement.

The second is part of NATO’s enhanced forward presence in the East. The United States will lead a battalion-sized unit in Poland with other NATO nations contributing troops and capabilities to the unit. Canada, Great Britain and Germany will lead similar mixed units in Latvia, Estonia and Lithuania.

The enhanced forward presence — which NATO leaders agreed to at the Warsaw summit — is important because it shows that all members security concerns are being addressed by the alliance, the chairman said. “That’s what makes the alliance relevant: each of the nations must feel that the alliance is meeting their security challenges,” Dunford said.

NATO can do and is doing more in dealing with the challenge of countering violent extremism, Dunford said. Its unique role is in defence capacity building, the general said. He cited the alliance’s Mediterranean Dialogue as an example of the capacity building that enhances stability for all. NATO works with Jordan, Egypt, Algeria, Israel, Tunisia, Mauretania and Morocco to build security capabilities and enhance the environment for economic development.

And, of course, NATO has been involved in capability and capacity building in Afghanistan for years.

This month, NATO will begin to deploy troops to Iraq to help the Iraqis build their security capacity, Dunford said. NATO officials are working closely with the Iraqi government.

Building capacity is important in Iraq moving forward because after ISIL is defeated in Mosul a logical extension of operations after Mosul is effective border police training and effective army training so Iraq has effective control of its borders. This will ensure ISIL doesn’t have the flexibility and freedom of movement to move back and forth across the border, Dunford said.

The general stressed that this is an Iraqi decision and that the Iraqis want to consolidate the gains of the last 18 months and turn it into permanent security and stability.

Dunford said he’d like to see an information and intelligence sharing network to aid in the fight. “We know Southeast Asia, West Africa and all points in between, nations are dealing with the threats posed, not just by ISIL, but also al-Qaida and other extremist organizations,” he said. “From a foreign fighter level, the example I use is 122 nations, 45,000-plus foreign fighters just to Syria and Iraq. Having visibility on those individuals and having information and intelligence sharing network — not just at the military level, but also with law enforcement officials is one of the ways we can put pressure on the network.”

The network would also help in combating in three specific areas: the narratives of the group, the resources flowing to and from the groups and the foreign fighters that are attracted to the groups, he said.

This network approach would also be valuable in facing other transregional challenges.