KPMG Report: the vital role of collaboration for defence capability

The word ‘collaboration’, much like ‘innovation’, has been bandied about with some regularity in defence industry circles of late but what does it really entail?

“Collaboration may be the single most important skill needed in the 21st Century security environment.  But unless it can be embedded in the people, commercial models and incentives for the whole defence sector it will become a box ticking exercise.” Steve Clark, Defence and National Security Sector Leader, KPMG Australia 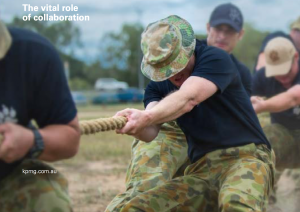 The Vital Role of Collaboration (KPMG)

KPMG, tasked with assisting Government and Defence in the daunting task of building defence industry capability, has released a report outlining what successful collaboration looks like and its vital importance for achieving the overarching aim. The KPMG report “Building defence Capability: The vital role of collaboration “ (dowload here), was presented at the NSW Collaboration for Defence Symposium held at the University of Technology Sydney mid Feb 2017.

In a defence collaboration survey conducted by KPMG in 2016 with defence and industry staff, 87 per cent of those surveyed were either implementing a model of collaboration or planning to in the next 12-24 months. However significant challenges remain with 74 per cent ranking culture and leadership of their organisation and that of their main partner as the significant barriers to more collaborative relationships.

Attitudes and behaviours, according to the report, will count more than contracts and policy when it comes to establishing effective collaboration.

“Collaboration may be the single most important skill needed in the 21st Century security environment,” KPMG Australia’s Defence and National Security Sector leader Steve Clark said. “But unless it can be embedded in the people, commercial models and incentives for the whole defence sector it will become a box ticking exercise.” 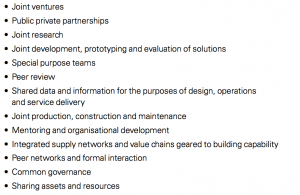 The many forms of collaboration – from KPMG report

The Integrated Investment Program is intended to facilitate the whole-of-life and whole-of-capability approach to investment.

According to the report, this new approach will require capability developers to be flexible and fast, as well as a change in behaviour from all involved.

“Quite simply, early engagement with industry is going to be the key to taking advantage of what industry has to offer so that we are all working together to ensure our war fighter has the best, ”former CEO Lockheed Martin ANZ Raydon Gates said.

While frameworks, standards, and models were important, KPMG stated it was the culture of the organisation that “makes or breaks collaboration”.

“By this we mean the style of leadership, the language used, the unspoken attitudes and norms of practice, the organisation’s openness to change or to the new, and the incentives and deterrents that shape the behaviour and interactions of staff.”

The report details characteristics of effective collaboration and provides numerous case studies highlighting experiences of the UK MoD and the healthcare sector.

How can we build a stronger defence capability?

The First Principles Review: Creating One Defence was quite clear about the nature of the problem. Defence’s organisational model and processes were complicated, slow and inef cient. Its approach to engaging industry, especially early in the project life cycle, was unsophisticated and staff were obsessively focussed on probity and competition requirements.

The review made a number of recommendations to address these widely-acknowledged structural and cultural issues including;

The importance of collaboration cannot be understated during this time of change. In fact, we believe that it is the foundation for success.  We need to stress that frameworks, standards and models are important but our experience shows that it is the culture of the organisation makes or breaks collaboration. People at all levels need both ‘hard’ and ‘soft’ skills as relationships evolve over time during the capability and acquisition life cycle and in response to new information.

Leadership will be essential. All staff will need to look for ways to model openness and trust and demonstrate a willingness to embrace difference and diversity. Timely and honest communication, a learning mind-set, agile and adaptive behaviours will be essential.

The challenges are great, both organisationally, culturally and in the wider policy and strategic context. Only collaboration can give Defence and its partners the resilience and agility to anticipate and respond effectively in this environment.