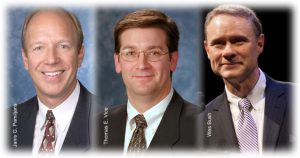 Janis G. Pamiljans has been elected Corporate VP and President of Aerospace Systems. Pamiljans will succeed Thomas E. Vice, who has announced his intention to retire. He will report to Wes Bush, the company’s chairman, chief executive officer and president, and become a member of the company’s Corporate Policy Council.

A 30-year veteran of Northrop Grumman, Pamiljans began his career working on the B-2 program, and has led many of the company’s major manned and unmanned aircraft programs. He presently serves as the general manager of Strategic Systems at Aerospace Systems.

“I want to thank Tom Vice for his tremendous service to our company over many years,” said Bush. “His strong focus on performance, innovation, and commitment to our customers has been instrumental in positioning us well for the long term.” Vice will continue as corporate vice president, reporting to Bush to support this transition and other company initiatives until his retirement.

“I am delighted that Janis Pamiljans will be taking on the leadership of this important business,” Bush said. “Our employees and our customers respect Janis for the great leadership he has demonstrated in leading some of the most advanced technology developments in our industry.”