Raytheon is building the U.S. Navy’s next-generation integrated air and missile defense radar, AN/SPY-6(V) AMDR, which will significantly increase the ability of ships to detect and counter ballistic missiles – one of the world’s fastest-growing threats – as well as other dangers in the air and on the sea. 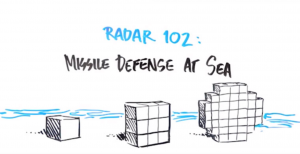 The system is advancing through development and is on target for the DDG-51 Flight III destroyer. Here are seven fast facts about this novel new radar:

The system is built with individual ‘building blocks’ called Radar Modular Assemblies. Each RMA is a self-contained radar in a 2’x2’x2’ box. They stack together and are time- and phase-synchronized to form any size radar aperture to meet the mission needs of any size ship, making AMDR the Navy’s first truly scalable radar.

Array size, or the number of RMAs needed, is customized to the mission needs of a ship, providing the capability to spot potential threats, including  ballistic missiles, cruise missiles, airborne adversaries or any combination of the above.

AMDR’s official Navy name is AN/SPY-6(V). It is the next in a series of great naval radars, including AN/SPY-1 (the current DDG 51 radar) and AN/SPY-3 Multi-Function Radar. But what does it all mean? The letters “AN” were originally part of the Joint Army-Navy Nomenclature System to help classify military systems and equipment. It later became known as the Joint Electronics Type Designation System, but the letters “AN” stuck.

Following the protocol, here’s what the name really means: S = water surface craft; P = radar; Y = multi-functional. The 6 is its model number and the V indicates that variants will follow.

It’ll take 37 RMAs (see cool fact #1) to build AMDR for the DDG 51 destroyers. When stacked together, this configuration will be 14 feet high and 14 feet wide. That’s roughly the same size as today’s AN/SPY-1D(V) radar, but better than 30 times more sensitive! Four “faces” will be built into the ship’s deckhouse to provide 360-degree coverage for threat detection and response.

In the unlikely event the radar needs repair, it can be done in a cinch. Close to 95 percent of the array’s maintenance comes down to just a few unique parts. Technicians can switch them out in six minutes, using only two tools.

Simplicity, reliability and design for manufacturing and assembly were top of mind for AMDR’s engineers. The radar requires 70 percent fewer unique parts (or what are called Line Replaceable Units) than the existing system on today’s DDG 51 ship. Because of this, the time and effort needed to make repairs is minimized.

Gallium nitride – or GaN – wafers, that is.

GaN is a wide-band, gap semiconductor material with special properties that amplify radio energy for radars, jammers and other devices. Radio frequency amplifiers made with gallium nitride are five times more powerful than the ones in radars that use traditional semiconductors. And, it provides all the power at a 34 percent lower cost than its alternative, gallium arsenide.

The team building AMDR uses an engineering approach called “Agile,” which can be traced to practices developed in Japan in the 1980s. They work in scrums; yes, the term from rugby describing teams of interlocked players with their heads down, pushing toward the goal.

Agile is all about collaboration, adaptability and early delivery of “working” products as soon as possible – essentially speeding up cycle times into bursts, or sprints, that help find issues early, mature systems faster and set a quicker pace for program progress.

The secret of Agile is that it gets together a team of people with the right expertise, working intensely on incremental goals. It promotes better communication and knowledge-sharing that leads to faster problem-solving.

SPY-6(V) is the next-generation integrated air and ballistic missile defense radar for the U.S. Navy, filling a critical capability gap for the surface fleet.

AMDR provides greater detection ranges and better discrimination accuracy than the radar onboard today’s destroyers. In fact, the 37 RMA configuration (see cool fact #3) can see a target of half the size at twice the range.

This document does not contain technology or technical data controlled under either the U.S. International Traffic in Arms Regulations or the U.S. Export Administration Regulations. E16-6PYM.