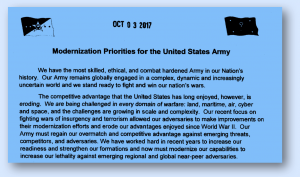 The U.S. Army is about to announce a reorganization to streamline and centralize the buying, building, replacing and testing of weapons and equipment, according to a letter released to general officers by Chief of Staff Gen. Mark Milley. 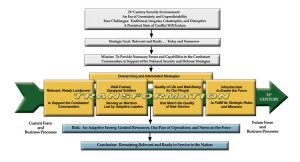 “Today, our Army is not institutionally organized to deliver modem critical capabilities to Soldiers and combat formations quickly. Our current modernization system is an Industrial Age model,” reads the letter. “Our recent focus on fighting wars of insurgency and terrorism allowed our adversaries to make improvements on their modernization efforts and erode our advantages enjoyed since World War II.”

Take that to mean: 20 years of shooting up the desert has allowed China and Russia a lot of breathing room to arm up against the United States. The U.S. Army is playing catch-up.