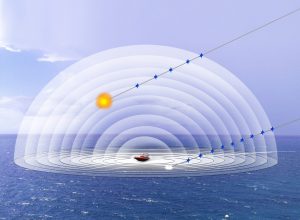 Thales has completed the Acquisition of Aveillant, World Pioneer in Holographic Radar Technology. With this acquisition, Thales will be able to offer customers, a new capability complementing its surveillance offering.

The architecture has been successfully proven as a Land and Surface Target Scoring (LSTS) platform for US Navy and the basis for radar mitigation around wind farms, by our spin-out Aveillant, but is applicable to other applications such as Low Visibility Landing Aids, Hostile Fire Indication, Littoral and area surveillance.

Wind turbines interfere with airport and military radar systems so various companies are trying to fix the problem. There are at least 50 mitigation solutions that have reared their head at some point in the past ten years. The most common forms of mitigation which are considered are: Radar blanking; Radar upgrade; Wind farm design and Radar In-Fill. Radar In-Fill solutions work by replacing data from the affected radar with data from an unaffected radar. In some cases the unaffected radar is a conventional radar that won’t see the turbines or it can be a radar that won’t be affected by the turbine.

There are a number of radar mitigation solutions that can be considered for wind farms including: