Port of the Future and Cyber Risks 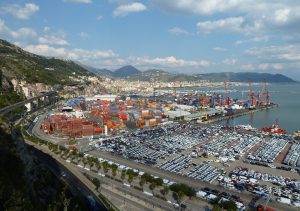 Cyber risks are not just a technological matter, but require adequate awareness and planning to strengthen a port’s resilience. Training employees actively in security protocols and procedures with information systems is one way of achieving this.

One example of port modernization is Singapore’s Tuas Port Project. To stay ahead of competing ports in Southeast Asia, PSA International and the city state have bet their future on the fully automated port on the western side of the island. The project is set to almost double the port’s current throughput capacity of twenty-foot equivalent units (TEUs) and consolidate all its container operations by 2040.

Container vessels on Asia-Europe trade routes will inevitably increase in size, requiring higher handling efficiency to achieve fast turn-around times. Ultra large container vessels are expected to gain a share of 61 percent of total capacity, pushing established hubs to automate its terminals to stay relevant. The next generation container vessels will not only be bigger, but also increasingly automated and even autonomous. As ports and the shipping industry are integral parts of global and regional supply chains, their automation and technological modernization raises the impact and potential of cyber risk.

How Good is Automation? 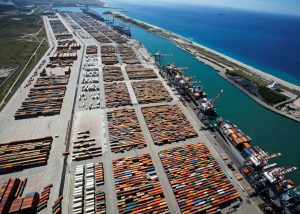 Automation is therefore seen to not only to strengthen ports position as a transshipment hub well into the future, but also to help in keeping up with technological developments and industry trends.

Fully-automated terminals have the advantage of lower operating costs and reliable operations, but require higher upfront costs, longer development, offer only low productivity increases at peak times, and have the general difficulty to fully automate a working terminal. On the other hand, semi-automated terminals offer the possibility for greater productivity increases at peak times, are generally understood to have the best overall productivity with less upfront costs, but require higher operating costs and are inconsistent when it comes to handling ULCVs.

While full automation gives large ports the advantage of reliable, full-time operations at low operating costs, it requires long development times to fix bugs and offers only gradual productivity increases at peak times. On top of that, full automation also increases their vulnerability to cyber risks.

Automation can also offer major port hubs predictability and consistency of container moves per hour. At the same time, automation reduces the environmental impact since terminals are mostly electrified, giving ports an additional competitive edge in an industry increasingly focused on sustainability.

The reality of cyber threats to automated terminals was demonstrated in the “NotPetya” cyber-attack in June 2017. The attack forced Maersk to interrupt operations at multiple terminals worldwide, causing logistical havoc for weeks after the attack. Overall, it cost Maersk roughly US$300 million, even though the attack was not specifically directed at the company. The “lucky hit” against one of the industry leaders showcases that even well-prepared firms can suffer financial losses due to cyber threats.

The difficulty with protecting automated terminals from cyber risks lies with their complexity. These terminals use industrial control systems that translate sensorial data and commands into mechanical actions. The network links between mechanical equipment and sensors are exposed to the same threats as data networks. The complexity is further increased by the months and years it can take to figure out and fix bugs and weaknesses in automated systems. In an automated system, different system components have to effectively work together as one, stretching the time needed to figure out and fix bugs. This involves mainly software issues that have to be fixed while also moving boxes of cargo at the terminal.

The shipping industry and ports are seen by many insiders as underprepared for cyber threats. Even though major players in the shipping industry have recognized and acted on the risks posed by cyber threats, the majority have been slow to recognize potential business risks. Automation further increases the exposure and impact of cyber threats for ports, highlighting the importance of data and system integrity. Even though awareness has grown, the need for better information sharing persists.

While ports have to secure themselves from a broad range of risks, cybercriminals can choose from a number of entry points. For example, external vendors, terminal operating systems, and unaware employees may be vulnerable to phishing attacks. Operational systems and data networks are not always up-to-date or properly secured, allowing criminals to gain comparatively easy access to information. To prevent the ports and shipping industry from most attacks, regular operating system updates, stronger passwords, secure satellite connections, resilience exercises, information sharing, and employee awareness campaigns should be practiced.

On top of that, modern ships bear the risk of spreading viruses onto port systems simply via Wi-Fi or other data networks. Industrial control systems are not designed with cyber risks or active network monitoring in mind. This is especially true for ships’ control systems, but can also affect the system components of ports.

Nevertheless, this is only addressing the technical side. The human factor still plays a major role in mitigating cyber risks. Personal details of ship crews can still be easily accessed, making them more vulnerable to social engineering via phishing or other techniques, unknowingly granting access to systems.

Human factors can take the form of criminals, terrorists, competitors, disgruntled employees, and more. Workers at mostly manual terminals, for example, generally do not like automation because it makes their jobs largely redundant. To reduce the chance for cyber threats stemming from or aided by disgruntled employees, ports can offer training and job guarantees to their workforce to make the transition to automation more incremental.

Port authorities, registries, and all major organizations in the shipping industry are increasingly aware of cyber threats and are responding through raising awareness or offering training courses. These are simple steps to better protect information and navigation systems on board ships. For example, BIMCO, the world’s largest international shipping association, made cyber security an important issue for the shipping industry three years ago via an awareness initiative. The association has further advocated the need for guidelines to evolve with the threats, launching the “Guidelines for Cyber Security Onboard Ships” in July 2017, which was endorsed and supported across the industry.

Nevertheless, it is unlikely that these campaigns are enough to protect the industry. While it is a step in the right direction, more needs to be done through regulations.

To stay ahead of competing ports and technological developments, automation has been heralded as inevitable. Major transshipment hubs and aspiring ports bet their future on automation, which raises the impact cyber risks could have in the long-run.

Since 2016, the International Maritime Organization (IMO) has put forward voluntary guidelines regarding cyber risks. Only after 2021 does the IMO plan to enforce a set of binding regulations on cybersecurity. This might be too late for many companies in the industry. Shipping companies should not wait until 2021, but should begin now to implement simple measures, like using firewalls and stronger passwords, to deter criminals from trying to exploit current weaknesses.

Further, even though the IMO adopted guidelines on maritime cyber risk management into the International Safety Management Code this year, ports and the shipping industry still need to establish a stronger culture on cybersecurity.

Major shipping hubs are part of large and less resilient supply chains, which are essential for regional and international trade. These supply chains depend on a small number of key ports, which are vulnerable to shocks from other ports. To make supply chains and port hubs more resilient to cyber risks, the shipping industry as a whole will have to adjust and prepare.

Companies will have to work together and share information on previous or ongoing attacks, so that experiences and best practices can be shared directly. Unfortunately, this has been difficult to achieve due to worries about how competitors may use the shared information. Singapore has set up the Port Authorities Focal Point Correspondence Network to further the exchange of information on past and current incidents. It remains to be seen if this network has worked to encourage the sharing of information.

Ports are logistical hubs where many companies compete for business, making information sharing naturally difficult. Currently, port security is based on the International Ship and Port Facility Security (ISPS) Code, which is heavily focused on the physical aspects of security. In order to make cyber risks a much more important issue for port security, the whole sector needs to step up and make it a priority.

Cyber risks are not just a technological matter, but require adequate awareness and planning to strengthen a port’s resilience. Training employees actively in security protocols and procedures with information systems is one way of achieving this. At the same time, ports need to engage in contingency and scenario planning to be better prepared should an attack occur. On top of all this, national bodies (e.g. institutes of standards) need to give better guidance on security testing and planning for ports, which should be supplemented by binding guidelines on reporting and information sharing mandated by global bodies like the IMO.

Text collected from an article written by Philipp Martin Dingeldey, Research Analyst at the Institute of Defence and Strategic Studies (IDSS), Singapore. This article in its original form can be found here.