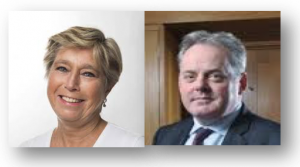 Defence Minister Guto Bebb hosted Secretary Tone Skogen, State Secretary in Norway’s Ministry of Defence, on her visit aboard a US Navy P-8A Poseidon aircraft – equipment which both the UK and Norway will soon own themselves.

The allies ramped up discussions around how the nations will work together and might deploy their submarine-hunting aircraft fleet in the future. Areas of co-operation could range from maintenance to training and operations, which would not only cut costs but also boost operational power in the North Atlantic, a key area of submarine activity.

The aircraft took off from RAF Lossiemouth, which will be the future home of the UK’s fleet. Investing £3 billion in the capability over the next decade, the UK is buying nine of the Boeing-built aircraft, whilst Norway are getting five. Their key role for the UK will be to protect the country’s submarine-based nuclear deterrent and its two new aircraft carriers – the Poseidons deploy sonobuoys to help them detect submarines, and can fire anti-ship missiles and launch torpedoes to destroy submarines.

Defence Minister Guto Bebb said: ”These sub-hunters will take to the skies from RAF Lossiemouth and help us combat a range of intensifying threats, not least increasing submarine activity in the North Atlantic. We’re investing £3bn in our own capability, but working alongside Norway takes this to a higher level. Not only could we cut costs by sharing training, spares and repair facilities, but we can patrol the seas together, meaning we’ve got more eyes and ears on any potential aggressors.”

Norway’s Secretary Tone Skogen said: ”Norway and the UK are natural partners given our shared values, as well as our history and geography. We can even further strengthen bilateral defence cooperation related to high-end capabilities such as the F-35 fighter and the P-8 maritime patrol aircraft.”

”In my discussions with Guto Bebb, Minister for Defence Procurement, I find a like-minded ally. The UK and Norway continue to stand together in training and exercises in the North Atlantic and the Northern region, as well as operationalisation of the Joint Expeditionary Force.”

The nine P-8A Poseidons will be based at RAF Lossiemouth in Scotland. Last month, Defence Secretary Gavin Williamson cut the first turf on a £132m facility for the new fleet. The new facility will be completed in 2020, to coincide with initial operating capability of the Poseidon aircraft being available in the UK.

At the peak of construction, the project will support 200 local jobs. When the fleet is fully operational, some 470 additional service personnel will be based at RAF Lossiemouth, taking the total number of people employed there to 2,200. Further roles are also expected when the training and support services are established at the new facility.