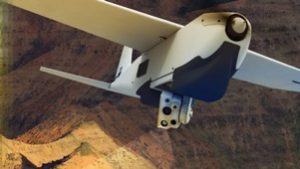 With the assignment for procurement and certification at the overall aircraft level, as well as the comprehensive system support of an unmanned aircraft system, the competence of ESG as an aviation company, as well as integrator and operator of complex systems has once more been recognized.

The procurement of 3 Puma AE II systems (à 2 aircraft systems) of AeroVironment closes the German navy’s capability gap in the field of airborne reconnaissance systems at their disposal for the tactical close-range maritime environment and complements the Bundeswehr’s UAS-portfolio with an internationally mission-proven UAS. „Through our partnership with AeroVironment, a leading provider of tactical UAS, we achieved to place precisely the system at the navy’s disposal, which they require to significantly expand their reconnaissance capabilities“, states Christoph Weber, head of business division Defence and Public Security.

With a weight of 6 kg and a range of 20 km, as well as the ability to be hand-launchable and to land on water, the employed UAS provides a high level of reconnaissance during day and night: The Puma systems will include the Mantis i45 sensor and pocket Remote Video Terminal (p/RVT). AeroVironment partnered with ESG to satisfy the requirement of the Bundesamt fur Ausrustung, Informationstechnik und Nutzung der Bundeswehr (BAAINBw) for an urgent operational requirement.

The Puma system is also used by the United States Special Operations Command (USSOCOM) for the U.S. Navy Expeditionary Combat Command Coastal Riverine Forces, the U.S. Army for convoy and ground troop support and the U.S. Marine Corps. The Navy procured Puma AE systems for use aboard Patrol Craft and also deployed them on a U.S. Navy Expeditionary Fast Transport (T-EPF) ship in support of counter organized crime operations in the Caribbean. The Puma system is also being deployed by multiple international partners