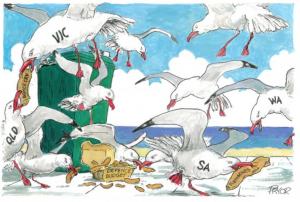 credits ASPI: The Cost of Defence

With defence purchases (in Australia) of about $200 billion planned or under way — and more than $56bn estimated to involve the army — it is no surprise the spending spree has grabbed headlines.

Less publicised is the cost of keeping equipment in operation for the Australian Defence Force.

Service and maintenance costs can comprise up to 80 per cent of total capability costs, according to Ian Mortimer, a logistics support specialist who is scheduled to speak at Land Forces 2018 on Thursday.

“With 70 per cent to 80 per cent of the costs of a capability being incurred during the in-service phase, this highlights the importance of gathering sufficient qualitative data to underpin the relevant analyses when designing the support system during acquisition,’’ Mortimer’s synopsis says.

In terms of current commitments, the Defence Department’s Capability Acquisition and Sustainment Group was expected to spend about $6.6bn to buy ADF equipment and services in 2017-18 and more than $5.7bn on sustainment. The defence budget estimates that the army will spend more than $1.6bn on sustainment in 2018-19, rising to more than $2.1bn in 2021-22.

The Australian Strategic Policy Institute says sustainment spending appears to be increasing faster than predicted. “This [financial] year’s sustainment budget is around $1bn more than predicted last year. Some of that is likely to be due to different accounting practices that Defence has adopted, but one gets the sense that perhaps the sustainment requirements of an increasingly complex force were underestimated,’’ an ASPI commentator writes.

Sustainment’s sizeable share of the defence budget will be welcomed by many Australian businesses, given that much servicing cost is incurred locally.

The budget says Australia’s defence industry employs about 25,000 people, many in up to 3000 small to medium enterprises. The 2018-19 budget papers included a call for a stronger ADF relationship with local industry and say future defence procurement will be underpinned by a “strategic contracting approach through collaborative relationships” with industry. Fostering such collaboration is the goal of the Centre for Defence Industry Capability launched in December 2016.