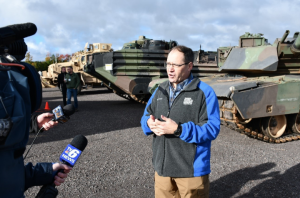 A U.S. Army research and development facility hosted NATO representatives for a three-day demonstration of its new military mobility software, as NATO allies work to ensure war fighters and their equipment can be quickly moved across Europe.

Paul Rogers, director of TARDEC, stressed to NATO representatives the importance of accurately predicting how military vehicles will respond to certain terrains and soils under various climates.

“What this allows us to do now is collect a whole new data set and then use that data set to optimize our analytical tools, our computer-based models, physics-based models so that we can do predictive analysis on soils that we have not tested,” Rogers said. This sort of predictive capability is, he added, “what we owe our war fighter, and that’s what we owe our future generations of engineers and scientists.”

“We’ve digitized every pebble in the proving ground here into a database,” Meldrum said. “So they can drive that vehicle through the terrain in the computer and try to predict the mobility, as we call it, of that vehicle going through that rough terrain.”

This research could prove relevant when it comes to “the change in the character of warfare, the kinds of operations that NATO member states have been part of, as well as due to technology developments,” said Marta Kepe, a Rand think tank analyst specializing in defense, security and infrastructure.

Leadership on both sides of the Atlantic are focused on military mobility in Europe. In fact, it is a leading issue of the European Union’s nascent Permanent Structured Cooperation initiative. Due to the legislative and administrative roadblocks, some believe the nature of the EU makes the organization well-suited to address the political challenges of mobility.

Jorge Domecq, head of the European Defence Agency, also shared that view at the symposium, saying that “for military mobility to work, you need a whole government approach to it, and that unfortunately you cannot do in NATO. You need to use EU to do it.”

But Thomas Goffus, former deputy assistant secretary of defense for Europe and NATO, pointed to the importance of involving NATO: “[T]wo things together: on the front end is having NATO command-and-control capability to move the chess pieces around the board; the second is having chess pieces that are ready to be moved.”

At a NATO summit in July, the alliance released a declaration noting the importance of identifying alternative supply routes and ensuring adequate transportation capabilities.

NATO Secretary General Jens Stoltenberg, in speaking before the alliance’s Parliamentary Assembly on May 28, said NATO’s security “does not just depend on the forces we have deployed, but it also very much depends on our ability to move forces to reinforce quickly if needed.”