‘Right direction’: NATO head Jens Stoltenberg said the increase showed “we are moving in the right direction.” He had previously argued NATO is undergoing a significant shift in spending as it seeks to deter Russia and undergoes its biggest modernization in decades. 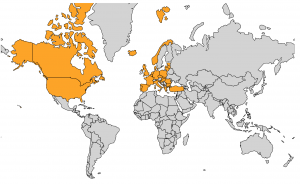 European NATO allies increased defense expenditure in 2018, with big rises in the Baltics, Poland and the Netherlands, according to new figures.

But while Canadian spending fell, Germany’s lagged and only six of NATOs 30 members, excluding the US, met the spending target of 2 percent as agreed at 2014 summit in Wales.

With overall European spending up, hitting a five-year high of 1.51 percent of GDP, Britain, Estonia, Greece, Latvia, Lithuania and Poland met the 2 percent goal, according to the NATO 2018 annual report.

Bulgaria, the Baltics and the Netherlands pumped in an extra 20 percent in 2018 compared to 2017 while Canada fell by almost 11 percent last year.

Europe’s largest economy, Germany, invested an additional €1.5 billion ($1.7 billion) in defense last year, raising the figure to almost €42 billion ($47 billion) and keeping its rate as a percentage of GDP stable at 1.23 percent.

France falls just slightly short of the goal by spending 1.8% of its GDP on defense. Romania also spends this percentage but with a smaller GDP, pays a smaller amount. Latvia’s military spending is also 1.8% of its GDP but the total amount spent is quite low when compared to the other members of NATO.

NATO collects current and estimated future defence expenditure data from Allies on a regular basis and presents aggregates and subsets of this information.