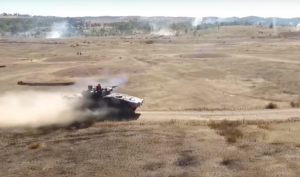 The military driver training systems are designed for basic and advanced driver training for any kind of wheeled and tracked military vehicle. Simulation technology permits to effectively transfer, practice and test the most complex training objectives.

The simulators can be reconfigured to train Army drivers on other types of armoured vehicles including the M1A1 Abrams Main Battle Tank and the future Infantry Fighting Vehicles.

Minister for Defence, Senator the Hon Linda Reynolds CSC, said this milestone was another step towards modernising Australia’s armoured vehicle fleet through the $5 billion LAND 400 Phase 2 Mounted Combat Reconnaissance Capability project. “The new Boxer vehicle fleet is part of the Government’s $200 billion investment in our defence capability to deliver a more potent, agile and capable Australian Defence Force,” she said. “The new vehicles will provide a world-class capability to the Australian Army with their high levels of protection, firepower and mobility.”

Defence’s acquisition of six driver training simulators was announced in February 2019, with the first simulators expected to be delivered in 2022.