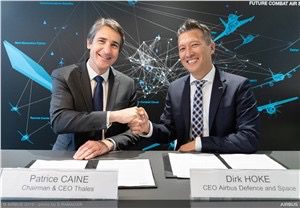 As part of beginning of February awarding of the Phase 1A Demonstrators contract for the Future Combat Air System (FCAS), Airbus and Thales have signed an agreement for the development of the Air Combat Cloud which will enable the FCAS system of systems.

Under this agreement Airbus and Thales will work jointly on the structural design of the Air Combat Cloud to support collaborative air operations at national and multinational levels, and will perform a first phase of technology demonstrations of air combat cloud capabilities. This agreement supports the Air Combat Cloud pillar of the Demonstrator Phase 1A  covering the next 18 month period and will serve as a starting point for demonstrators and technology development.

FCAS will deliver increasing operational effects by leveraging the collaborative capabilities of connected manned and unmanned platforms, bringing the next level of Air Power to denied environments. Within FCAS, the Air Combat Cloud will in real time connect and synchronise all the platforms and enable the processing and distribution of information to enhance situational awareness and collaborative operations.

Airbus as European leader in Defence and Security will bring the strength of its wide range of expertise and solutions in combat and mission aircraft (including development and integration of mission and weapon systems), space systems and collaborative C5ISR (digitalized command and control, communication, cybersecurity, intelligence, surveillance, reconnaissance).

Thales will bring its expertise in Defence Equipment and Solutions, in space and aerospace systems, driven by its global leadership in digital security. Both companies’ strong skill in digitalisation and operational systems related to collaborative combat are provided through their solutions covering the entire critical decision chain in an increasingly interconnected world.

The two companies will design the Air Combat Cloud, first in the frame of the Franco German FCAS cooperation but with the clear ambition towards enlarging the scope of collaborative combat capabilities between national Air Forces at European level should the member nations decide so. The incremental inclusion of platforms and related collaborative combat capabilities, which when combined with the New Generation Fighter and Remote Carriers in 2040, will achieve the full FCAS ambitious challenge.

Airbus and Thales are convinced that, by combining both companies’ capabilities with the wider French and German defence industry, both partners will actively contribute to shaping future European air power, the key to securing Europe’s operational, technological and industrial sovereignty for the coming decades.