As members retire from their parliamentary roles, they offer NATO a skilled and informed resource, as they continue to act as informal goodwill ambassadors. In the past few years, many long-term members of the NPA have retired, taking with them crucial networks, communication and insights. We must not waste these skills. 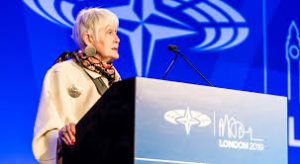 There are few people in the defence world who would deny that we live in dangerous and turbulent times. The public are now on the front line of the grey zone where constant attacks from opponents seek to undermine our values, principles and trust in democratic institutions through disinformation campaigns, cyber attacks and the manipulation of public opinion.
During my time as President of the NATO Parliamentary Assembly (NPA), I felt that as a political–military alliance, NATO had spent too much time focusing on the military potential of Article 5 and forgotten the strategic political importance of other articles in the Alliance’s founding document, the Washington Treaty.
I believe that the wider role that parliamentarians, diplomats and military personnel can play in the awakening of the Alliance needs to be explored and recognised.

CONNECTING TO A YOUNGER GENERATION
… As President of the NPA, I spent time talking to young people across the Alliance about the importance of the founding values which determined to safeguard their freedom, founded on the principles of democracy, individual liberty and the rule of law. These are values which seek to promote stability and wellbeing in the North Atlantic area.
I found a great interest among young people to understand these basic concepts, but a lack of formal education and trusted sources of information to provide the support needed. At a time of rising instability, populism and uncertainty, many stated that it felt as though some member states used the Alliance as an ideological battleground, a place for leveraging individual leaders’ economic and foreign policy aspirations rather than common values. Distrust was everywhere. Those founding values have, in some cases, become detached from governments’ policies. The problem is compounded by a lack of recognition among the member states’ populations on what the driving forces of their democracies are. As distrust in politics and politicians grow, we need to refocus on the values and principles which underpin our Alliance.
THE ADVANTAGES OF THE NATO PARLIAMENTARY ASSEMBLY
Decision-making and communication with the wider populations of member states were recognised as inherent weaknesses by NATO’s founders. As a result, they were written into Article 2, which states that: “The Parties will contribute toward the further development of peaceful and friendly international relations by strengthening their free institutions, by bringing about a better understanding of the principles upon which these institutions are founded, and by promoting conditions of stability and well-being. They will seek to eliminate conflict in their international economic policies and will encourage economic collaboration between any or all of them.”
Article 2 forms a central part of the NPA’s handbook for new parliamentarians. This reference material also lists the Assembly’s goals:

Working with the NPA, NATO can tackle this lack of public engagement and comprehension and build societal resilience. The NPA offers a ready-made vehicle through which to grow awareness of the Alliance, its principles, values and aspirations, and to foster a wider debate and understanding of defence and security threats.
The NPA is a vehicle for reaching out to the populations of member states, especially to young people. Building national resilience through sharing the best practices and expertise of allies is non-threatening and, indeed, essential. In addition, the NPA’s committee structure offers an opportunity for parliamentarians to gain a wider perspective of defence and security by exploring its civil, political, economic, scientific and technological dimensions. Reports from these committees provide invaluable information for national parliaments and their committees, many of which may otherwise see themselves as having no defence remit.
The NPA also fulfils a vital training role with the new generation of parliamentarians elected to it, many of whom have had little political or defence experience. This is important, as some members will go on to hold high office as ministers, high representatives, speakers and leaders of academic institutions. We must not underestimate the NPA’s long- and short-term diplomatic role in fostering personal relationships between its members.
Importantly, the NPA provides a safe place for disagreements and asking difficult questions within an institutional rules-based setting. While such disagreements and questions may create difficulties at a government-to-government or military-to-military level, the NPA can safely explore tensions and solutions.

Madeleine Moon, former President of the NATO Parliamentary Assembly, express her concerns on the disengagement from defence. (abstract of an article taken from Rusi.org)